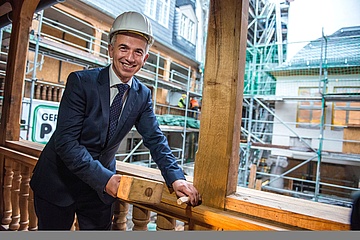 (kus) The reconstruction of Frankfurt's old town is progressing according to plan. Numerous architectural and craftsmanship highlights are currently in their final stages. One of these is the historic wooden arcades in the inner courtyard of the "Goldenes Lämmchen", a former patrician's residence and trade fair courtyard, which is being reconstructed true to the original. During a site visit, Lord Mayor Peter Feldmann visited the "Lämmchenhof" on Monday, July 24, and saw for himself the progress of the work.

"The citizens are looking forward to &sbquo;their' new old town. Week after week, more scaffolding is falling, new perspectives are emerging in the heart of Frankfurt. Here in &sbquo;Lämmchenhof' alone, over 400 years of city history can be read on the facades. Alongside neuralgic points such as the Coronation Walk, the Golden Scales and the Archaeological Garden, the Old Town as a whole offers the opportunity to experience our own city history in a new way."

Over the course of the past few weeks, the team from the Eifert carpentry company in Grebenau had brought the oak support pillars and the turned balusters - the individual columns that make up the balustrade - to the construction site and assembled them there. Two buildings, the "Goldene Lämmchen" (Hinter dem Lämmchen 6) and the new building at Braubachstraße 27, each have a wooden pergola on the façade facing the courtyard.

"For the future residents, but also for the citizens and guests of the city, entering the &sbquo;Lämmchenhof' will open up a world of its own. On a small scale, the charm of the old town with its handcrafted details and the effect of the individual buildings in interaction is revealed here. I am very much looking forward to the opening of the Old Town next year, when we hand it over to the citizens," said Feldmann.

The wood used for the arcades comes from second-hand sources and is between 200 and 300 years old. As Managing Director Dirk Eifert reported, the dimensions of the piers exceeded what was available on the market today. Also, only well-seasoned oak wood is dry enough to be used in the buildings of the old town. The two supporting pillars that carry the arcade of the "Goldenes Lämmchens", for example, had lain in the cellar of a sawmill for 80 years and were only discovered when it was demolished. Now they are being given a new purpose in the "Lämmchenhof"