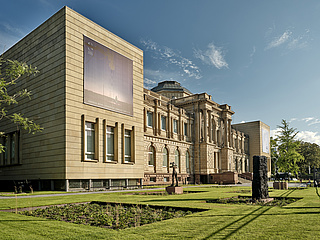 After more than a year of work and around 3 million euros in costs, it's done: as of now, the new Städel Garden, the museum's first collection space, invites visitors to discover outstanding works of modern and contemporary art free of charge. Also new is a barrier-free elevator next to the museum's main entrance.

Presented will be a total of 14 sculptures from the museum's own holdings - the most recent acquisition by Elmgreen & Dragset Si par une nuit d'hiver un voyageur (2017) is on view for the first time. In a new setting, the selection of artworks from August Gaul's Der Eselreiter (1912), Georg Kolbe's Annunciation (1912/1913) to Reg Butler's Figure in Space (1958/1959), Per Kirkeby's Gate II (1987-1991) and Tobias Rehberger's Capri Moon (2011) illustrate the evolution of sculpture over the past 100 years.

The new presentation of the sculptures was based on a design by landscape architects Levin Monsigny, who are known for their major project Museum Island Berlin. Various structural measures were implemented in the Städel Garden over an area of around 5,200 m²: The sculptures are now placed on their own sandstone pedestals in fields planted with ivy and white flowers. A large forecourt was created in front of the main entrance to the Städel Museum as a central meeting place for visitors. The entire museum building was paved with Mayen basalt lava and the ground level was raised. In addition, energy-saving, climate-protecting LED lighting was installed on the historic Main riverbank façade, which has already been extensively restored and fitted with new windows in 2019. On seating groups, chairs and benches it can linger in the new Städel garden.

Visitor terrace planned on the roof of the Städel

To ensure a resource-conserving use of drinking water, two cisterns were built to collect rainwater for the irrigation of the garden's green areas. In the course of this, the sewage systems were also renewed.

A barrier-free access with elevator system was also installed at the museum's main entrance at a cost of around 600,000 euros. Recently dubbed "Frankfurt's most expensive elevator" by museum director Philipp Demandt, visitors with limited mobility can now reach the Städel quickly and centrally via this elevator. The next project will be the construction of a visitors' terrace on the roof of the Städel Museum, starting at the end of August. Both construction projects were designed by architects schneider+schumacher, who also designed the Städel Museum's extension, the Garden Halls for the Contemporary Art Collection, which opened in 2012.

Museum director Philipp Demandt on the new Städel Garden: "The new garden is the Städel Museum's first collection space - and much more. It is part of a major master plan that envisages important conversion and new construction measures over several years. The aim is to strengthen the Städel Museum as a place of art - both inside and out. We achieve this not only with an attractive exhibition program, but also by using energy sources, water, gas and electricity in a resource-saving way. In the spirit of sustainable museum operation, we are already thinking about tomorrow. The fact that we, as a private museum foundation, are able to implement these necessary structural upgrades is thanks to the wonderful commitment and helpfulness of the citizens of this city. The new Städel Garden is by and for Frankfurt." 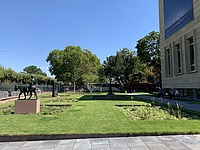 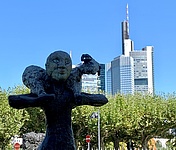 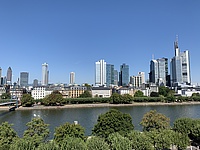 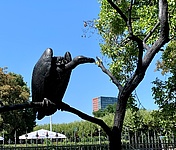 .All construction measures in and around the Städel Museum are part of an energy management plan developed in-house, the aim of which is to plan energy-efficiently and implement long-term solutions for sustainable, climate-protecting museum and exhibition operations. In recent years, the Städel Museum has been able to reduce electricity consumption, for example, by converting to LED lighting technology in the collection rooms and, among other things, by installing a geothermal system (2012). Construction projects already completed in recent years include the restoration of the historic Main riverbank façade (2019), the refurbishment of the Prints and Drawings Department (2020), and the redesign of the Old Masters area (2021). Currently, the Modern Art Collection area is also being converted to LED lighting technology (completion in October 2022).

The structural measures of the new Städel Garden as well as the accompanying works were financed by private donations. Barrier-free access in the Städel Museum was made possible by the Dagmar Westberg Foundation with proportional support from the City of Frankfurt and private donations. The in situ restoration of the bronze sculptures by Arthur Volkmann and August Gaul was supported by the Michael Hauck Foundation.