The next dates for MUSIC SNEAK are set
from FFM Aktuell 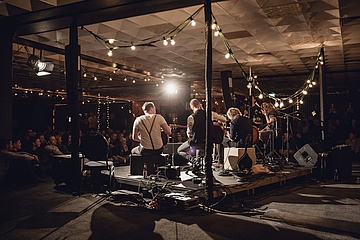 The concept of MUSIC SNEAK <link https: www.frankfurt-tipp.de ffm-aktuell s ugc music-sneak-nicht-nur-kinos-koennen-sneak.html _blank>we already presented to you some time ago HERE. After the first editions the organizers can draw a positive summary. The surprise gigs are really well received by the audience - and also by the artists. Now the series continues with new dates. It starts on Saturday (21 July) with a summer edition, which will also feature an open air stage in the club's atrium, weather permitting. However, tickets are also already on sale for the autumn dates on 13 October and 30 November 2018.

New is also the booking and orga team of the concert series, which is now led by Ellen Giersberg and Julia Mücke from the heart of the Jahrhunderthalle. The well-tried concept of the Music Sneak has not changed. The acts of the evening will remain secret until the performance. As always, Finn Holitzka, word acrobat and U20 Hesse Poetry Slam champion, will lead the evening on his swing. Ellen Giersberg and Julia Mücke have long been part of the Jahrhunderthalle Frankfurt's core team and have been involved in the conception and implementation of the concert series since its inception in early 2017. From now on, the booking of the Music Sneak will also be in their hands.

Not only musically have all previous Music Sneak acts played at a very high level. Also in terms of stage presence and show quality, the artists were absolutely convincing. First and foremost, the guys from Salamanda, Itchy Teeth and Klub Erika from Frankfurt, who all captivated the unsuspecting audience and made them freak out. Also unforgettable, the energetic performance of Adriano BaTolba Trio, John Ory or Bender & Schillinger

The Music Sneak as a puzzle piece on the way to a musical career, also already made use of some artists. AB Syndrom from Berlin for example, Music Sneak act of the first hour, made a small breakthrough with their third album Plastik in March this year. The duo, which has been highly praised by the music press such as Intro and Musikexpress, has meanwhile made it from indie secret tip to public radio and is currently playing on radioeins and Radio Fritz from rbb. AB Syndrome are going on a club tour in autumn.

Also the Berlin pop-punk duo Prada Meinhoff, who could be experienced at the Music Sneak last December, start the festival summer 2018 after their joint tour with MIA. You can see them at the Trebur Open Air or the Feel Festival at the Bergheider See, among others.

Furthermore, there will be a lot to discover and experience at the Music Sneak. On 21.07. you can look forward to Finn Holitzka, host of the evening and probably the most charming word artist of Frankfurt. The reputation of the Jahrhunderthalle Frankfurt as the birthplace of Rock&acute;n&acute;Roll in Germany, provides the appropriate background, the stylish 60s club the atmospheric setting.