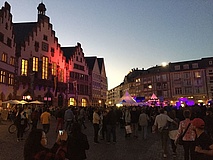 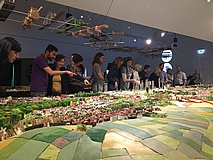 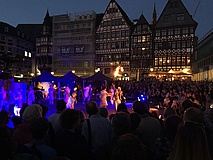 Once again, 40 museums and galleries in Frankfurt and Offenbach opened their doors to the public on Saturday night and offered a colorful program around the current exhibitions. Whether special tours, performances, music, readings or workshops - everywhere there was plenty to discover, enjoy and try out. Around 37,000 visitors did not miss out on this. Even though there were long queues in front of some of the exhibition halls and it was impossible to get anywhere near all the great things on offer despite the shuttle buses, it was once again a very special night for everyone.

There was an Ottifanten painting competition at the Caricatura Museum, a musical journey through time at the Römer, a coffee ceremony from Eritrea at the Junges Museum, a special film programme at the CineStar Metropolis and a dance performance on the Römerberg that created a particularly magical atmosphere. In the Historisches Museum there was a very special reading with the well-known dubbing actors Oliver Rohrbeck (including Ben Stiller) and Detlef Bierstedt (including George Clooney), in the Museum für Kommunikation "Alles außer schlaf" was on the programme and in the Städel Museum the successful "Rubens" exhibition attracted a large crowd.

Commissioner for Culture Ina Hartwig was enthusiastic about the once again very great interest in this cultural event: "It's great to see people from Frankfurt and the region on their feet at a late hour to experience art in many different places. I would like to thank all the participating institutions, museums, galleries and off-spaces very much for this wonderful program, which once again makes it possible to experience the diversity of our Frankfurt cultural landscape in one night."

After a lengthy renovation, the popular observatory was also back for the first time, bringing a sparkle to the eyes of big and small space fans with its space exhibition. There was also a big crowd at the Lufthansa Aviation Center, which was taking part for the first time - guests were greeted by Pepper, the robot that celebrated its world premiere on the night.

So there really was a lot to see on this "Night of Museums". We took advantage of the occasion to join a very special guided tour that showcased a really nice project by the Office of Multicultural Affairs. This is called "Kultüröffner: Museum" and it united interested people of different languages of origin in their interest in art and culture in five different tours during the "Night of the Museums". After the groups had explored the Historical Museum, the Römer, the World Cultures Museum and the Goethe House in Turkish, Farsi, French and Arabic, Sylvia Weber, Head of the Department for Integration and Education, invited them to a final exchange at the Protestant Academy on the Römerberg.

The aim of the project, which was launched at the "Night of the Museums" last year, is not only to make it easier for all people to access cultural institutions. It also aims to help break down language barriers and bring people together through culture. "Not only can all participants expand their language skills. The project mediates conversations and contacts through the topics of art and culture," says Sylvia Weber. The guided tours in the various languages take place throughout the year. In cooperation with the museums, the guides from the language communities receive training in advance. The Office for Multicultural Affairs (Amt für multikulturelle Angelegenheiten, AmkA) offers the tours together with the Volkshochschule Frankfurt am Main.

To illustrate this project and its objectives, an event like the "Night of the Museums" is of course particularly well suited. For it is here that the diversity that characterises life in Frankfurt becomes particularly clear - diversity in art, diversity in culture, diversity in the nationalities of the visitors. Shared exchange is just as important here as access to a city's cultural institutions. A project like "Kultüröffner: Museum" is definitely an important step in the right direction. And at the same time - as the "Night of the Museums" has made clear - a very nice, interesting and entertaining event.