The Old Bridge has him back
from FFM Aktuell 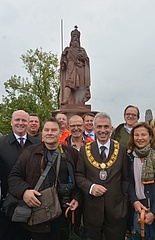 Emperor Charlemagne is back

(pia) Since Saturday, October 1, the statue of Charlemagne is back on the Old Bridge. "The whole city is pleased that Frankfurt thus has one of its important landmarks back," said Lord Mayor Peter Feldmann in his celebratory speech.

In a solemn ceremony, he unveiled the statue together with the head of the transport department Klaus Oesterling and Professor Christoph Mäckler, architect and chairman of the New Bridge Construction Association Frankfurt.

"This is a faithful copy of the statue from 1843, which stood on the Old Bridge until 1914 and will have a permanent place in the new building of the Historical Museum," explained the Lord Mayor.

The Brückenbauverein has financed the costs for the production of the statue with the help of donations. The Lord Mayor thanked the association for the generous gift and praised its commitment.

For Christoph Mäckler, this is a big step: "Charlemagne has great symbolic appeal. With his return to the Old Bridge, a piece of Frankfurt's history comes alive again in the cityscape." After the unveiling, guests on the banks of the Main celebrated the return of Charlemagne.

The reinstallation of the statue of Charlemagne is part of the bridge renovation project designed by Christoph Mäckler and carried out by the Office for Road Construction and Development of the City of Frankfurt am Main. The true-to-original copy of the sculpture was created by means of a 3D scan, on the basis of which a rough form was milled from red Main sandstone. The Berlin stonemason Andreas Hoferick was responsible for the subsequent elaborate sculptural work. He worked the head of the statue after historical picture material, since the reconstruction from the 1980s does not correspond to the original.

"After Charlemagne, another landmark is to return to the Old Bridge next year: The bridge cross with the golden rooster, popularly known as the Brickegickel. The renovation of this monument from the early 15th century has also thankfully taken over the bridge building society, Feldmann was pleased to say