The Online Program of LICHTER-On-Demand
from FFM Aktuell 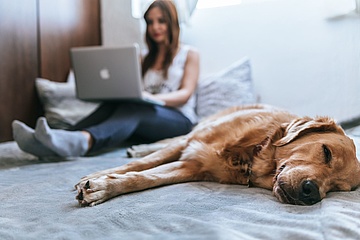 It was announced a few weeks ago that the renowned LICHTER Film Festival can only take place in digital format this year. Now the final program for LICHTER-On-Demand has also been announced: From April 21 to 26, LICHTER will show current world cinema on the theme of "power", highlights of German film and the best from Hesse and virtual reality via the streaming platform Festival Scope. Interviews with filmmakers and podcasts on the "Future of German Film" initiative will also be available, creating a festival atmosphere in your living room over the six days.

The audience* can look forward to over 50 feature-length, short and VR films. An overview of the complete program is provided by the LICHTER website: https://lichter-filmfest.en/program/lichter-on-demand-program-2020/

And here's how it works

Once you land on the program page, you're just a few clicks away from watching a movie. The streaming offer ranges from free films - the finalists* of the 4th VR Storytelling Awards as well as a selection of international short films - to the regional short film reels for a rental fee of 3,00 Euro and the cross-section long films for 8,00 Euro. The proceeds are divided between rights holders, LICHTER and the festival cinemas in Frankfurt. After payment, the respective film is available "on-demand" for 30 hours - during this time, the film can be viewed indefinitely.

"As in the cinema, the streams are limited to 300 views. Here, too, at some point it means: sold out is sold out!", says festival director Gregor Maria Schubert. Festival atmosphere is not only guaranteed by the first virtual festival party, which will be broadcast via LICHTER's social media on Festival Friday. LICHTER-On-Demand is also interactive: viewers have the opportunity to vote online for the best regional short film and win the LICHTER Short Film Audience Award powered by Journal Frankfurt. Voting starts right at the beginning of the festival. The first place is endowed with 1.000 Euro. The second and third place winners will receive various Journal subscriptions.

For many films, the festival will record film discussions in advance. The festival organizers are particularly looking forward to an interview with Alexander Kluge, who will present his new film "Orphea".

On the annual theme "Power", the festival makers talk to filmmakers Matthew Rankin (director of The Twentieth Century), Julien Elie (director of Soleis Noirs) and Lila Avil&eacute;s (director of La Camerista). From the regional film program, filmmakers Inigo Westmeier (Black China), Lisa Charlotte Friederich (LIVE), and Sarah HÃ¼ther and Sita Scherer (At The Margin) will be on hand to answer questions. Learn about the future of German film with Melanie Waelde (director of Naked Animals) and Mala Reinhardt (director of The Second Attack).

The second edition of the Future German Film Congress is scheduled to take place in autumn 2020. Until then, however, the initiators of the congress are not keeping their feet still. On LICHTER-On-Demand, they are launching a podcast series that will revolve around the effects of the Corona crisis on the film industry, address the threat to cinema posed by populism and right-wing extremism, and evaluate possible reforms in the wake of the amendment to the Film Subsidies Act in 2022. "We started with a film series, took an important step forward in the film policy debate with the Frankfurt Positions and now want to draw even more attention to the &sbquo;Future German Film' initiative with a regular podcast format until the second congress," says LICHTER director Johann SÃ¼ÃŸ.

LICHTER-Bembel will continue to be awarded

The regional long film prize of the Dr. Marschner Foundation, endowed with 3,000 euros, and the short film prize, endowed with 1,000 euros, will continue to be awarded. Two expert juries will deliberate via videoconference on this year's prize winners.

The films and juries of the two film competitions can be found here: https://lichter-filmfest.de/lichter-on-demand-programm/regionaler-filmwettbewerb/