The perfect summer feeling? Barefoot in the park!
from FFM Aktuell 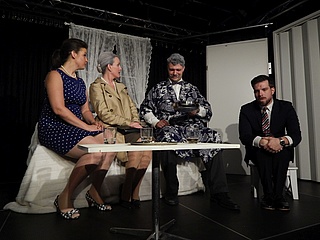 The summer holidays are just around the corner and with them the well-deserved summer break for most of the city's theatres. Also at Theater Alte Brücke in Sachsenhausen a very versatile second season, marked by creativity and passion, is coming to an end. At the end there are still a few performances full of summer freshness, which are definitely worth a visit to the "smallest off-Broadway theatre in the world". For example, on July 07 there is once again the wonderful Georg Kreisler revue "Immer wieder Tauben vergiften" to see, which we have introduced to you in more detail HERE. Bastian Korff and Florian Ludewig invite you to the preview of their new program on 08 July to "go swimming" together. They will offer you "An evening without shipwreck and athlete's foot, but with chanson, comedy and cabaret". Sounds promising. Carola Moritz (vocals) and Michael Policnik (accordion) will then close the season on July 14 with a musical journey through the world of French chanson.

A real highlight of this second season for the fledgling theater is the production of Neil Simon's classic "Barefoot in the Park," still playing June 23 and 24. After the great "View from the Bridge" or the rousing "Sister Rose", the second play by Stephen Adly Guirgis, which artistic director Alexander J. Beck brought from Broadway to Frankfurt, pure summer lightness prevails here (even if the play is set in winter). The boulevard comedy, first performed in 1963 and later successfully filmed with Robert Redford and Jane Fonda, is the perfect play to get the audience in the mood for summer. And it's further proof of the programming versatility that sets the Old Bridge Theatre apart.

The play tells the story of young, up-and-coming lawyer Paul Bratter (Fabio Sorgini), who has become smitten with the impulsive, fun-loving Corie (Sabrina Faber). Without further ado, the two marry and move into a small New York apartment. On the fifth floor, without an elevator, but with a hole in the skylight. Paradise looks different. Nevertheless, Paul and Corie firmly believe that their love is strong enough to be happy together, even in the smallest of spaces, without a bathtub and functioning heating. But working on his first important case, the visit of Corie's mother Ethel (Tanja Schumann) and the visits of her extremely strange neighbor Victor Velasco (played alternately by Alexander J. Beck and Jan Peter Nowak) quickly put their young happiness to quite a test.

"Barefoot in the Park" provides the audience with an entertaining break from everyday life in a very charming way. Witty dialogue and turbulent twists prove that Neil Simon has created a truly timeless comedy classic with this play. The actors are all convincing and make the characters truly likeable protagonists despite - or perhaps because of - their quirks. Tanja Schumann is truly great as the mother on the verge of a nervous breakdown and Fabio Sorgini is also absolutely convincing as the young lawyer, torn between his professional ambitions and his love for Corie. The almost childlike naive joie de vivre that his wife exudes is embodied quite brilliantly by Sabrina Faber. And Victor Velasco is a wonderful opportunity for Alexander J. Beck and Jan Peter Nowak to play out their comic talents, which is used to great effect.

So if you want to enjoy some refreshingly light theatre fare before the hot summer months, take part in some bitterly nasty pigeon poisoning, go for a musical swim or embark on a journey through the world of chanson, you should definitely pay the Theater Alte Brücke another visit.

Tickets and more info can be found HERE