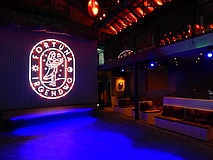 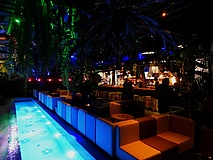 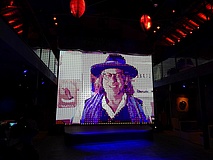 With the legendary King Kamehameha Club, Ardi Goldman was once the "King of the Frankfurt Night". In recent years he had withdrawn completely from the club life of the city and concentrated on his hotels. But now Goldman not only wants to return to Frankfurt's nightlife, but also revolutionize it. At the press presentation of his latest project in the premises of the Kesselhaus, built in 1908, which housed the Kingka from 1999 to 2013, Goldman immediately made it clear: "At 56, I'm still doing a club because most clubs in the city don't tell a story. And I'm a storyteller." And so the "Fortuna Irgendwo" is not supposed to be a club in the classical sense, but a "sanatorium for the mentally ill", who can fight melancholy with joie de vivre. However, the "Union Gelände" on the Hanauer Landstraße is still being worked on to complete final details such as the entrance area. Nevertheless, we could already get a very good impression of what will be offered to the guests here in a few weeks. Goldman has a very clear vision: When it's grey and cold in Frankfurt, you can get on a plane and only a few hours later you are in warmer climes where you can relax and unwind. The "Fortune Somewhere" is supposed to offer its visitors exactly this holiday feeling - just right in the city.

The jungle garden with the Tiki-Bar, among other things, is supposed to provide this feeling. With its Mediterranean flair, an atmospherically illuminated pool, numerous plants, a beautifully designed grotto and an appealing interior, it creates an inviting South Seas atmosphere - at any time of the year. While it is nice and cozy warm in winter, the roof of this area can be completely opened in summer, which will provide a refreshing summer breeze. </Goldman's artistic director Michael Dreher is responsible for this realisation. Together with the architect Ivo Nikolov, he has given "Fortuna Irgendwo" a truly relaxing flair. Whether with the illuminated Octopus Bar or the Riva Lounge, which is modelled on an elegant Italian motorboat from the 50s, here you really feel like on holiday. Also on the dance floor it becomes clear that the "Fortuna Irgendwo" is supposed to be a colourful place. This is also ensured by a very special feature of this location: the light art wall. This was created by the Cologne light artist JoJo Tillmann. But since he is also the only one who can operate them, Tillmann moved to Frankfurt for at least a year to pass on his knowledge to future visual artists. The music is accompanied by 2,500 diamond cap lamps, which are placed over a structural screen made of different materials, to create the appropriate images.

"Music to be touched by" is to be offered. But there will not be a new live club band. Goldman has decided against it, because he does not want to offer his visitors a cover band. Otherwise, versatility is the order of the day. Like every little detail in "Fortuna Somewhere", the music should be unadapted and surprising. This is what "intellectual DJs" are supposed to ensure. This refers to DJs who don't think in terms of pigeonholes, but rather combine the most diverse subjects with one another - and can bring them into harmony with the light art wall.

For Ardi Goldman it is clear: "We will not do any name dropping and hire expensive star DJs just to attract guests with their names. No, this is the location of the star." There would be many people who could not find a place to dance in Frankfurt. Be it because they don't like the music or because they just want to go out and party at 10 pm and not at 3 am. And it is precisely these people that Goldman sees as its target audience. Five days a week he wants to lure people to his "sanatorium" with French-Mediterranean sounds from the record, live concerts, a bar and DJ evening or a free style evening. A courageous project, but one that could well pay off due to the special concept of this location. With "Fortuna Irgendwo" Ardi Goldmann has created a place of longing that consciously breaks with conventions. A place that is just as suitable for a sociable chat as it is for dancing, drinking, celebrating and flirting. A place where art, concerts, parties and performances come together and thus offer the city a new form of evening entertainment. Purely atmospherically, this was definitely successful. Whether the "Fortuna Irgendwo" will offer many Frankfurters similar unforgettable memories as the King Kamehameha Club once did, remains to be seen from 26 March 2020.