The Poetry Tram to the Book Fair
from FFM Aktuell 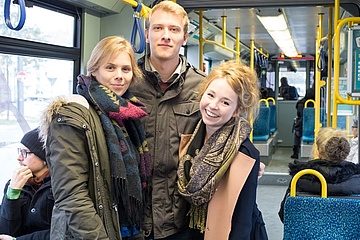 The Friends of the Frankfurt Book Fair, the location marketing company FrankfurtRheinMain GmbH International Marketing of the Region and the communications agency BALLCOM Digital Public Relations surprised the international Book Fair audience with a very special event: On Thursday, the three poetry slammers Timo Kurth, Laura Berninger and Eva Schilling performed English poems on tram line 16 of the Frankfurt transport company (VGF) and turned the tram into a poetry tram without further ado. The poetry slammers sitting in the tram stood up abruptly on the journey and recited "Get Drunk" by Charles Baudelaire and "Put out my eyes" by Rainer Maria Rilke, among others. Eric Menges, Managing Director of FrankfurtRheinMain GmbH, explains the background to the event: "Due to Brexit, a particularly large number of eyes from English-speaking countries are looking at Frankfurt and the Rhine-Main region. We expect - not least because of the Brexit - numerous new, international fellow citizens here in the city. With this campaign, we want to illustrate the character of FrankfurtRhineMain as a cosmopolitan metropolitan region in which exciting cultural events naturally also take place in English. The Poetry Tram has flashmob character and, with a wink, shows that English is the second language in the Main metropolis." 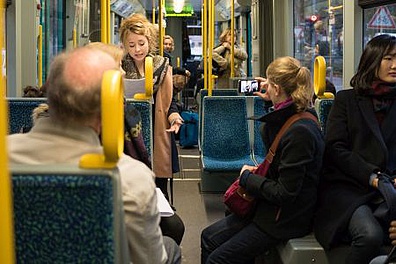 Frank Pauli of the Frankfurt Book Fair adds: "With the poetry slam in the tram, we want to draw attention to the fact that the Book Fair belongs to Frankfurt, so we deliberately brought the action &sbquo;right into the 'middle of life' of Frankfurt and highlighted the internationality of the Book Fair as well as Frankfurt's citizens.“

There is a film about the action, which documents the slams and shows the reactions of the fellow travellers. It can be viewed on the social media channels of the partners involved - such as Youtube and Facebook.

You can see the film here: <link https: www.youtube.com _blank>