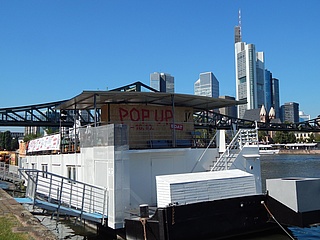 The Jewish Museum is undergoing a major overhaul and breaking new ground to engage with the citizens of Frankfurt. Following the Jewish tradition of temporary buildings that recall the time of the Israelite wanderings in the desert, the museum is now moving into a ship next to the Eiserner Steg on Schaumainkai, which has been fitted with exhibition elements and redesigned. The ship will become the Pop Up Boat of the new Jewish Museum for six weeks. It will open on September 4, 2016, the European Day of Jewish Culture, and close at the beginning of the Feast of Tabernacles (Sukkot). An extensive and varied program of events will take place on board.

The Pop Up Boat serves as a laboratory for the Jewish Museum's new permanent exhibition: in a specially built exhibition module, both collection objects and architectural plans will be presented, which the museum staff will personally introduce to visitors. Short lectures at lunchtime and afternoon workshops will provide insight into questions and conceptual thoughts on the new permanent exhibition. Two participatory stations invite visitors to vote on a name for the new town square in the museum's entrance area and to send wishes to the new Jewish Museum.

The free one-day program is divided into three formats:

Open Boat to linger aboard, daily from 12pm-1pm

Volker Breidecker. On September 24, Volker Reiche and FAZ editor Andreas Platthaus will talk about the comic "Manu and Saul" at the construction fence in front of the Rothschild Palais. At the end of the Pop Up Boat on Sunday, October 16, Vocal Global Music will present a concert matinee with songs in Hebrew, English, and Creole.

In addition, there will be a separate program for children ages 8 and up on three Sundays:

"Well Sheltered" for the Feast of Tabernacles (Oct. 9)

Youth ages 12 and up are invited to a beatboxing workshop on the last day of opening, Oct. 16. During the week, school class workshops are planned in cooperation with the Fritz Bauer Institute's Pedagogical Center and the Jewish Museum. Food and beverages on board will be provided by Badias Catering.

The evening events program provides a platform for contemporary Jewish culture. The readings, film screenings, concerts, performances, culinary events and panel discussions that will take place on board will provide an insight into the diversity of Jewish self-understanding processes. A thematic focus of the evening program is the reflection on flight and migration and their significance for the current situation in Germany. The program accentuates the shifting of traditional affiliations and norms as well as the free and in-between spaces that being on the move makes possible beyond - also gender-specific - role conceptions. Highlights in this context include an open-air cinema night as part of the Jewish Film Festival, presenting four short films on the theme of "On the road".

A panel discussion with program director Cilly Kugelmann (Jewish Museum Berlin), writer Gila Lustiger, and historian Kathrin Kollmeier revolves around Jewish perspectives on the refugee crisis in Europe. The concert evening with refugee musicians, who formed the ensemble Tremolo as part of "Bridges - Music Connects", is dedicated to Syrian and other traditionals from the Middle East. The performances of the just published autobiographical books "The Smile of My Invisible Father" by Dimitrij Kapitelman and "Germanija" by Dimitrij Belkin reflect on the desires, questions and problems associated with the immigration of Russian-speaking Jews to Germany. The first Frankfurt reading by Deborah Feldman from her bestseller "Un-Orthodox" will provide insight into the emancipation process of a young woman from an ultra-Orthodox community. A panel discussion on "Religiousness and Feminism" with Rabbi Elisa Klapheck,

religion scholar Naime Cakir, and Associate Dean Ursula Schoen will reflect on the gendered role offerings of the Torah, Bible, and Quran.

Social media communications are conducted under the hashtag #popupboat. Information about the topics of the lunch talks and workshops on board will be announced on board as well as on Facebook.

There will be an admission charge for the evening events; tickets can be purchased in advance on board or at the box office at Museum Judengasse. For dinner events, mandatory registration is required. The evening program includes the following events: 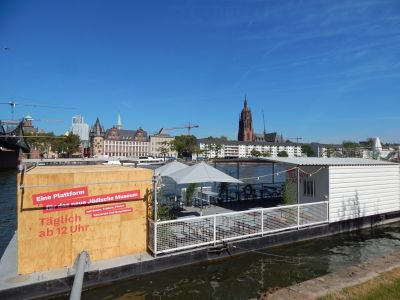 "The Smile of My Invisible Father" - book presentation and talk with Dmitrij Kapitelman, in cooperation with the Jewish Community Frankfurt (admission: 6 euros / concessions: 3 euros)

"It's OK to write that!" - Book presentation with Shahak Shapira, in cooperation with the Society of Friends and Patrons of the Jewish Museum

"Jewish Perspectives on the European Refugee Crisis" - panel discussion with Cilly Kugelmann, Gila Lustiger and Dr. Kathrin Kollmeier, moderated by Dr. Mirjam Wenzel, in cooperation with the Fritz Bauer Institute on the History and Impact of the Holocaust (Admission: 6 euros / reduced: 3 euros)

"The Casting: Who was Bertha Pappenheim?" - Performance with Agatha Cion and Elianna Renner, in cooperation with the Junge Akademie (admission: 6 euros / reduced: 3 euros)

"Germanija. How I Became Jewish and Grown Up in Germany" - book launch and talk with Dmitrij Belkin (admission: 6 euros / reduced: 3 euros)

"Unorthodox" - Reading with Deborah Feldman, in cooperation with the Jewish Community Frankfurt and the Society of Friends and Patrons of the Jewish Museum (Admission: 6 euros / reduced: 3 euros)