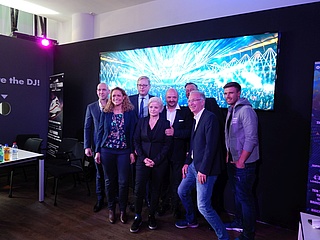 Soon it will be time: The Commerzbank Arena will turn into the biggest club in the world for three days from June 2nd to 4th. Some highlights, like the WCD POOL SESSIONS, the DORIAN GRAY or the Party-ICE as well as the big Program-Highlights we have already introduced to you. But these are not the only reasons why the BigCityBeats WORLD CLUB DOME 2017 will outshine its successful predecessors.

On a total area of 700,000 square metres, numerous floors will be created with the help of equipment transported by well over 100 low-loaders to Frankfurt, where visitors from all over Germany and abroad can experience a party weekend of a special kind. The construction takes four days, during which the diligent workers consume a full 5 million calories - and probably burn them again immediately.

With top acts like Alle Farben, Robin Schulz or Steve Aoki some of the most successful DJs of the world could be won to heat up the visitors of the BigCityBeats WORLD CLUB DOME. Further highlights are undoubtedly the sets of Deichkind, Hardwell or Sven Väth, the veteran of the Frankfurt dance scene. But also the other acts will provide for a multifaceted and absolutely top-class event. With first-class technology, which alone requires almost 50km of data cable and an external power supply, and the international top acts, standards will be set not only on the main stage in the arena, but also on the entire grounds of the Commerzbank Arena.

Not only in the Commerzbank Arena is there a real party. The many guests who travel to this unique party from all over Germany and abroad have two exclusive possibilities this year: a party ICE will travel from Paris via various stations to the Commerzbank Arena. And even in the air you can celebrate: At an altitude of 12km, a specially converted Airbus 340 Club Jet with two DJ areas and 100 first class seats will then transform into the highest club in the world.

All this shows what a mega-event this event has become in the meantime. Up to 40,000 guests per day are expected this year, which means that in the end more than 130,000 visitors from 24 countries will have celebrated in Frankfurt. Tickets were sold to the Bahamas, China or Papa New Guinea. The unique line-up, the great atmosphere in the Commerzbank Arena and the participation of the Frankfurt clubs make the BigCityBeats WORLD CLUB DOME 2017 not only a Frankfurt event but also an international event highlight that visitors will never forget.

At the Gleisdreieck next to the festival area 3000 - 4000 campers for a few days in the 44th district of Frankfurt will be built. Here the supermarket chain Penny will open a festival store and there are also barbecue areas for the campers.

The RMV has already noticed in recent years that this number of people also wants to be moved. We have now learned from mistakes in the past and offer not only more buses, suburban trains and trams, but also more regional trains, which will run until 1 am. There will also be local mobility counsellors.

The 3 CD Box BIG CITY BEATS 26 was released in time for the event. With sixty tracks by David Guetta, Lost Frequencies, The Chainsmokers, Dimitri Vegas, Robin Schulz or Bastille, visitors to the WORLD CLUB DOME can perfectly prepare for the three-day party. (Text: Sebastian Betzold)

You can also find more information under: www.worldclubdome.de