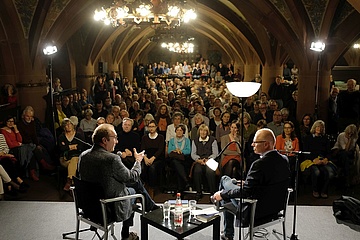 A beautiful tradition at the Frankfurt Book Fair will take place again in 2019. When the Frankfurt Book Fair opens its doors on 15 October, a large number of Frankfurt cultural institutions and the city's cultural office will take the opportunity to put together a varied supporting programme. Of course, this also includes Open Books, the big reading festival of the city of Frankfurt at the Book Fair, which takes place from 15 to 19 October: More than 150 events with around 250 authors from Germany and around the world are planned this year, including Jakob Augstein, Isabel Bogdan, Rebecca Gablé, Joachim Gauck, Maja Lunde, Marina and Herfried Münkler, Luisa Neubauer, Sascha Lobo and Sarah Wagenknecht.

As always, the reading festival will take place at venues around the Roman Empire and this year also in the Old Town. The most important new publications of the autumn in the field of German-language fiction and poetry, the non-fiction book, the graphic novel and international literature - in particular the host country Norway - as well as the children's book will be presented here.

"The urban reading festival Open Books is today regarded as a nationally recognised cultural brand. Since 2009, Sonja Vandenrath's organizing team has been able to make the most diverse literary genres a tangible experience in a variety of ways every year. The book presentations and readings, exhibitions and performances offered in Frankfurt's urban space create a unique opportunity for authors and readers to meet and exchange ideas, from which publishers also benefit," says Cultural Director Ina Hartwig. "Ina Hartwig

94 publishing houses from Germany, Austria and Switzerland use the opportunity to present the novelties of her autumn programme at Open Books. In addition to events on German-language fiction, new non-fiction books and graphic novels, readings by international authors with a special focus on Norway, this year's host country, will take place. At the opening of Open Books 2019, Joachim Gauck, Felicitas Hoppe, David Wagner and the winner of the German Book Prize the day before will present their latest books on the Blue Sofa in the German National Library. Literature in the Roman Halls in the Roman Halls focuses on the most important German-language novels of autumn: on Mess Wednesday and Thursday, eight authors each will present their latest works in a short moderated discussion. The reading festival will conclude with a big party in good tradition at the Literaturhaus Frankfurt. Apart from a few exceptions (opening, part of the movement and the closing party), admission to all readings is free.

The director of Open Books, Sonja Vandenrath, says: "Open Books, this is also the reading festival in the heart of the city in 2019. We remain true to ourselves and yet have grown. Thanks to the new old town, we are gaining a beautiful quarter that meets the growing demand for space. Rooms reminiscent of the 18th century, when the reading mania was proverbial. With this in mind, we would also like to see a return of the sociable reading culture as an expression of a broad enthusiasm for books."

At the Book Fair and in the city, the Guest of Honour appearance will present Norwegian literature and culture in all its diversity in cooperation with numerous cultural institutions in Frankfurt. In addition to readings, you can also experience exhibitions, concerts, performances, theatre performances and film screenings.

"The city of Frankfurt, its museums and cultural institutions have welcomed us with open arms, so that there are now numerous opportunities to get to know Norwegian art and literature. The same applies to German-language publishers: over 190 of them present books from or about Norway in their programmes. For us this is Traum˝, says Halldór Guðmundsson, project manager of the Norwegian guest country appearance.

This is how the Museum of Applied Arts transforms itself into the House of Norway from 11. October to January 26, 2020 and shows positions from Norway's art and culture, design, crafts and architecture on its entire exhibition space.

The show "Ethereal. Photographic Art from Norway" at Fotografie Forum Frankfurt is dedicated to the works of Dag Alveng, AK Dolven and Linn Pedersen (Thursday, October 3 to January 12, 2020), while the German Architecture Museum will present the exhibition "In Norwegian Landscapes. Hunting high and low" explores the peculiarities of Norway's architectural tradition and presents current projects from various geographical parts of the country that frequently reflect the relationship between buildings and landscape (14 September 2019 to 19 January 2020).

Exceptional monumental tapestries by Hannah Ryggen can be seen at the Schirn Kunsthalle from 26 September 2019 to 12 January 2020. For the first time in Germany, the large solo exhibition presents the public with a comprehensive insight into the monumental, politically inspired work of the Norwegian-Swedish artist.

With the exhibition "Eaten Fish", Haus am Dom invites the public to engage with drawings by Ali Dorani from October 2 to 30. The cartoonist, who lives in Norway, documents his stay of several years as a refugee in an Australian refugee camp. In the exhibition hall 1A, the artist Monika Hansebakken, who formerly resided in Atelierfrankfurt, is exhibiting a cross-section of her work at the invitation of the Kulturamt Frankfurt (17 October - 3 November 2019). Her work combines painting with sculptural elements and deals with the beauty of the Norwegian landscape as well as the threat to nature.

At the Norsk Festival in the Mousonturm from 15 to 19 October, some of the most important personalities of the Norwegian music scene make themselves known. In addition to concerts and a club night, the extensive festival programme also includes performances, readings, poetry slams and talks. Rock, Pop, Electro, Jazz and Folk - and thus an impressive cross-section of the Nordic sound worlds.

The Norwegian film industry will be illuminated in October at the German Film Institute & Film Museum (DFF) from the silent film era to the present day. In September, there will be a retrospective of all seven feature films by the internationally renowned director Bent Hamer to date. But of course, Norwegian literature will move the whole of Frankfurt: Oliver Møystad's introduction to Norwegian literary history at the LiteraturLounge in Haus am Dom (13. October 2019, 11 a.m.), and the Literaturbahnhof in the Haus des Buches presents two Norwegian writers and their new publications every day for one hour (16 - 19 October 2019). The Literaturhaus and Jostein Gaarder will be guests at the Schauspiel Frankfurt (17 October 2019, 6 p.m.), Jan Erik Vold, Lotta Elstad and Lars Saabye-Christensen will present their new publications at the Romanfabrik (16 October 2019, 8 p.m.). Synnøve Persen, Niillas Holmberg, Inga Ravna Eira and Dirk Hülstrunk will talk about New Sami Poetry between tradition and modernity on 17 October 2019 in the Central Library (19.30 hrs). A long night of Norwegian literature will be hosted by the Hessisches Literaturforum in the Mousonturm (18. October 2019, 19.30).

The Schauspiel Frankfurt brings "Brand" by Henrik Ibsen in a new translation on stage (premiere: 12 October 2019), "Wieder da" by contemporary dramatist Fredrik Brattberg will have its German premiere in September 2019. Two guest performances can also be experienced at the Städtische Bühnen: the Nationaltheatret Oslo will perform Henrik Ibsen's "Nordic Heerfahrt" (16th/17th century). October 2019), the Norske Teatret plays the award-winning "Trilogy" by Jon Fosse in a production by Luk Perceval (23/24 October 2019).