The Rocky Horror Show comes back to Frankfurt
from FFM Aktuell 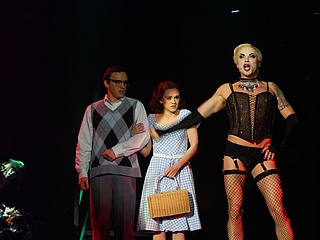 The pre-sale begins on Halloween!

Tickets can be ordered HERE

Since its premiere in 1973, the musical "Rocky Horror Show" by British actor, author and composer Richard O`Brien has been an absolute cult. Not least due to the congenial film version from 1975, which after average reviews and slight initial difficulties has developed into a long-running hit in many art house cinemas, the musical has been able to gain a broad fan base all over the world - a fan base that is still growing steadily more than 40 years after the premiere. So it's no wonder that it's always a spectacle when the musical comes to town in its original production. Because the "Rocky Horror Show" isn't just about the story and the timelessly good songs. It's also about the direct involvement of the audience, which can turn any performance into a really big party.

At the 2015 Frankfurt guest performance, that was exactly the case. Right from the opening number "Science Fiction Double Feature", vocally performed by Magenta, it was clear that you were in for entertainment par excellence. Shortly after, the audience was called upon for the first time to celebrate the first appearance of the young couple Brad Majors and Janet with wild confetti throwing. The fun ramps up with the first appearance of the narrator, usually to be rattled with loud "Boring" shouts. How confidently and quick-wittedly Sky Du Mont completed this task was also repeatedly acknowledged by the audience with loud laughter and applause.

But there are also genuine emotional moments. For example, when the whole hall turns into a sea of lights during "Over at the Frankenstein Place", it's not just the wonderful melody of the song that gives you goosebumps. But this quickly gives way to a real party feeling when the mood reaches its climax with the cult song "The Time Wrap". With this number it also becomes clear that the recipe for success of the musical consists of a perfect symbiosis of talented cast, first-class musicians, colorful costumes and atmospheric decor. So it's no wonder that the audience can hardly stay in their seats after barely 20 minutes.

But the cast of this production is also really quite outstanding, with the "Rocky Horror Show" of course primarily devoted to one character: that of "Sweet Transvestite" Frank&acute;n&acute;Furter. Rob Fowler, who may still be familiar to some viewers from his participation in "The Voice of Germany", delivered a great performance in every respect as an alien scientist from the planet Transsexual in 2015. Vocally beyond all doubt, he also presents himself in top acting form. The way he involves the audience in his play with little glances or short utterances is simply wonderful. That his last number "I`m going Home" then culminated in thunderous applause and standing ovations at the preview was not only more than deserved, but also visibly moved Fowler. At the latest now he had won all the sympathies of the audience for himself.

At the epilogue and the two encores the big hall of the Alte Oper was finally boiling. Here it became clear once again how much fun the musical is, how great all the actors sang and what an excellent performance even the musicians, who were somewhat hidden in the gallery, delivered. The audience is offered an extremely funny, colourful, slightly frivolous evening with great songs and a perfect atmosphere. Of course, the more people in the audience that join in, the better. If you missed it in 2015 or would like to experience it again, you will have the opportunity to do so in early 2018, because the ROCKY HORROR SHOW is coming back to Frankfurt!

Therefore, the rule is: secure tickets now. Because nobody should miss this party! "Let`s do the Time Wrap again". and again. and again. (Text by Sebastian Betzold)