The Römer in a new light: Lyon gives Frankfurt a light installation
from FFM Aktuell 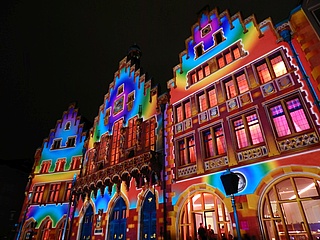 "You have never seen the Römer like this before". With these words, Frankfurt's mayor had the Römer illuminated in bright colors on Monday evening. The reason for this is a donation from the twin city of Lyon as part of the Frankfurt Book Fair, which welcomes France as its guest country in 2017. The illumination is the work of the Parisian light artist Patrice Warrener. In red, blue, yellow and green, he beautifully sets the scene for the town hall façade.

The starting signal for the illumination, which can be seen every evening from 7 to 11 p.m. until October 14, was given by OB Feldmann together with his Lyon counterpart Georges K&eacute;n&eacute;p&eacute;kian. Both were not only very pleased with the result, but also with the great interest of the people of Frankfurt, as the Römer was well filled for the enlightenment.

(kus) "Even if some people are currently painting a dark picture of Europe, with our joint illumination action we are sending a strong signal for friendship, solidarity and connectedness. Where the good forces of art prevail, light penetrates even the darkest corner. It is therefore a great pleasure for me, together with my Lyon counterpart Georges K&eacute;p&eacute;n&eacute;kian, to present the Light Illumination by Patrice Warrener," Feldmann said when Lyon offered the illumination.

Warrener uses a proprietary illumination technique he developed called "chromoliths." To accurately illuminate the facade, there are 6000-watt projectors on the Römerberg. This technique shows the Römer in a different light - bright colors and other effects will show off the unique architecture in a special way. The façade will not only shine in different colours, but a detailed, colourful replica will also be projected onto the front of the building. The Römer represents a special challenge for the artist. "This is a beautiful and extraordinary building. Describing the illumination of the Roman is about as difficult as describing a Monet," Warrener explains. That's why, he says, he jumped at the chance when Lyon offered him the job of illuminating the twin city's town hall.

Warrener is an artist known beyond France's borders. He has been working on building illuminations since 1987. Warrener has lit around 100 churches, cathedrals, town halls, theatres and other buildings. These include London's Westminster Abbey, York Minster, the Opera de Lyon, the Arc de Triomphe in Marseille and Frankfurt's Festhalle. Warrener's light sculptures are regularly on display at the "F&ecirc;tes des Lumi&egrave;res", the world's oldest and most important light festival in Lyon.

The light artist has felt a connection to the bright medium since his youth. "It's a magical story. I didn't decide to play with light. It all started when I was 17 years old," says the artist. He found his way to building illumination via light and laser shows at music gigs. "In the 60s I had a friend who had a pop band. This one needed lights at their gigs. That was the beginning of a long story," Warrener recounts. In 1989, the Garnier Opera House in Paris was the first building he staged with light. After that, 100 illuminations followed in France, Europe and around the world.

He is particularly fond of older properties. "Historic buildings have a lot more detail, like statues or columns, and those are very important to me," Warrener explains. What fascinates him so much about light, however, is impossible for him to explain. It would simply be this, "Light is life!" And when asked why he finds colors so fascinating, his answer is clear: "Everyone loves rainbows, right?"

The illumination, realized by Patrice Warrener, was made possible by the close collaboration of the city of Lyon and the city of Frankfurt am Main, as well as the partners Cluster Lumi&egrave;re, Institut Fran&ccedil;ais and EDF Germany.