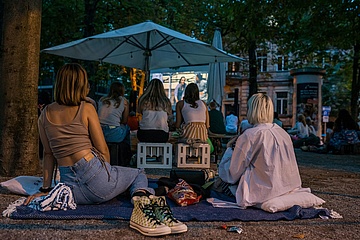 For four days this summer, Wiesenhüttenplatz in the Bahnhofsviertel will once again be transformed into an open-air cinema. On the occasion of the upcoming autumn exhibition "Paula Modersohn-Becker" (October 8, 2021 to February 6, 2022), the Schirn Kunsthalle invites visitors to enjoy four films that focus on women who broke with artistic and social conventions of their time. Just as Paula Modersohn-Becker (1876-1907) anticipated central tendencies of modernism in her work, the protagonists of the cinematic dramas reveal their striving for individual, avant-garde freedom and self-determination. Thus, the international film program at the Schirn Open-Air Cinema starts with Paula (2016), followed by Camille Claudel 1915 (2013), Séraphine (2008) and Little Women (2019).

Admission is at 7 p.m. in each case, the films then start after dark. Admission is free, but negative proof (test, vaccination, recovery) is required. All films will be shown in the original language, Camille Claudel 1915, Séraphine and Little Women with German subtitles. The YokYok Kiosk team will offer cool drinks and snacks. In case of rain, the event will be cancelled on the respective evening.

Paula Modersohn-Becker's life is marked by the urge for her own artistic self-realization. Together with her husband, she seeks ways to combine her artistic existence with a family life and leads an artist's marriage far removed from the usual patterns of her time. Director Christian Schwochow's film not only focuses on the relationship between Paula Modersohn-Becker and Otto Modersohn. It contrasts them with the patriarchal structures at the beginning of the 20th century, shows life in the German Empire and devotes colorful attention to Paula Modersohn-Becker's artistic development.

The basis of Bruno Dumont's work is the biography of the famous French sculptor Camille Claudel. In 1915, the artist has already been in the Montdevergues mental institution, where her family had her committed, for two years. She has only one chance to leave the institution: she must convince her brother Paul Claudel. She eagerly awaits his announced visit. The script for the film is based primarily on letters Claudel wrote to her brother, as well as her medical records.

Director Martin Provost's French-Belgian film biography is dedicated to the life of painter Séraphine Louis, one of the most important representatives of Naive Art in France: by chance, German art collector Wilhelm Uhde discovers the paintings of his idiosyncratic housekeeper Séraphine during a stay in France in 1912. Convinced by her unusual style, he offers to sponsor her. But at the outbreak of the First World War he has to leave France. Years later, he meets Séraphine again and helps her to international fame. But Séraphine doesn't know how to deal with the change of life; she can't manage her newly earned money and falls into a delusion.

Greta Gerwig's historical drama is based on the novel of the same name by Louisa May Alcott and set in 19th century New England: while their father fights in the American Civil War, the four March sisters are closely bonded to their mother. The lives of the siblings seven years later are shown in parallel. The main focus is on Jo, an author who wants to publish a book about her family, without bringing the themes of relationships and love to the fore. Gerwig infuses the film with the liberal sense of freedom of a modern feminist movement. Questions such as the definition of femininity, of family hierarchies and of individual freedom are raised and brought closer in artistic performance.

More info is available at: www.schirn.de