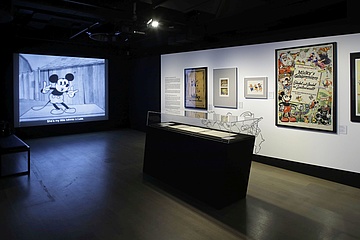 The DFF - Deutsches Filminstitut & Filmmuseum opens the doors to a very special exhibition on Friday, 07 August: In THE SOUND OF DISNEY. 1928 - 1967, the sound worlds of well-known Disney classics, in the creation of which Walt Disney himself was involved, are put under the microscope. The work of voice actors, sound designers, composers and international dubbing artists is illuminated by means of numerous film clips, original photos, documents and interactive stations. In the process, exhibition visitors learn many exciting facts about Disney - such as the fact that Walt Disney himself worked for a long time as a voice actor on his films and lent his voice to Mickey Mouse, probably his most famous creation.

An excerpt from a documentary film shows how the adventures of a little locomotive were brought to life sonically in an animated short film. It's both fascinating and entertaining. Particularly worth seeing are also the many exhibits from film classics such as SNOWWITCH, ASCHENPUTTEL, FANTASIE, PETER PAN and even the DSCHUNGELBUCH. The majority of the exhibits come from the collection of the Munich City Museum, the last venue of the exhibition "How Walt Disney Animation Is Made", which toured Europe from 1959 to 1963. What makes these exhibits so special is that they were once assembled by Walt Disney himself. But exhibits from the DFF's own archives and loans from the American Heritage Center and the Southern Oregon Historical Society also make for a lot of listening pleasure and great showmanship to enjoy through January 10, 2021.

From various poster designs to photos from the studio, sheet music with handwritten notes, sketches, character studies and background designs for many Walt Disney productions, the exhibits are sure to make any Disney fan's heart skip a beat. In addition, the works of two video artists are shown in two small screening rooms, who deal with the Dungeon Book in a very interesting way. In one work, for example, the different language versions of the classic were cut together so that each animal speaks a different language. The result is really exciting!

Although the theme of sound in its various facets is clearly in the foreground. Nevertheless, there is also quite a lot to see in this exhibition, which is why it really is suitable for all ages. The show is complemented by an extensive supporting programme. In addition to film screenings or panel discussions, numerous guests of honour such as dubbing actors are expected at the live events. Due to the Corona pandemic, there is only a reduced number of seats available, so you should quickly secure tickets for the events, which are now available in advance (online or on site at the museum).

You can find the complete program and all further information at: www.SoundOfDisney.dff.film