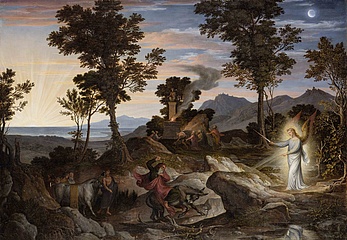 The Städel Museum is receiving back the painting Landscape with the Prophet Balaam and his Donkey (ca. 1832) by the painter Joseph Anton Koch (1768-1839). The work, which belongs to the museum's holdings, had been considered lost since 1945 and was last in private hands. Thanks to the generous gesture of its return from private ownership, it can now be seen again at the Städel. The painting has been carefully restored and reframed at the museum for presentation in the collection's 19th-century art section. It is thus once again part of the Städel's extensive collection of works by Joseph Anton Koch. In total, three paintings,13 drawings and 49 prints provide a profound insight into the work of the artist, whose impact on 19th-century German art cannot be overestimated.

"For the extraordinary gesture and generosity of returning the painting to the Städel Museum, we are indebted to its former owner. Since the Städel was founded in 1815, this work was one of the early, impressive acquisitions of contemporary art. With the return, the work of the artist Joseph Anton Koch can once again be conveyed in its entire spectrum in the museum," says Philipp Demandt, director of the Städel Museum.

"Joseph Anton Koch is one of the outstanding landscape painters of the early 19th century. His painting is characterized by clear contours, luminous colors and a strict pictorial structure according to the rules of classical compositional theory. With his painting style and especially his biblical motifs, Koch exerted a lasting influence on German artists in Rome, especially on the members of the Catholic St. Luke's League, who are still known worldwide under the name of Nazarenes," says Alexander Eiling, Head of Modern Art, Städel Museum.