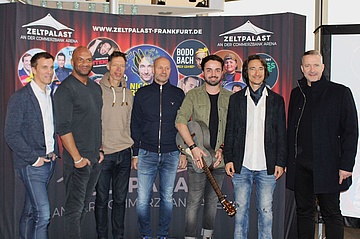 A unique event location will be created at the beginning of December on the parking lot P9 at the Commerzbank Arena - the TENT PALACE! From 16.12.2019 to 30.01.2020, the Zeltpalast will open its doors almost daily for exclusive shows in a unique ambience. Sensational artists will provide an exquisite program in an intimate atmosphere during this time, whether magic, comedy, culinary, music or edutainment. The highlight: The maximum of 333 spectators can look directly at the artists' fingers and be very close to the stage action. This is made possible by the unique arrangement of the seats, the last row is 7.70m away from the stage.

The program in the new event location was now presented in the presence of some artists who will perform here. After a short musical welcome by singer/songwriter Jonathan Zelter, Stefan Schornstein, managing director of S-Promotion, explained the concept of the Zeltpalastest, making one thing clear: this is not meant to be a one-off guest performance, but should become firmly established over several years. The idea for the tent palace came during a conversation with the mental magician Nicolai Friedrich. The question was whether he would like to plan a new tour or do something that is very special. During the resulting brainstorming, Friedrich came up with the idea of being able to do a close-up show. A program where every audience member can really watch him perform.

With that idea in mind, the tent palace was conceived. "It is important to me that the audience is very close," says Friedrich, the world champion of mental magic. After all, it's often the little things that go down well with the audience and the closer they are, the more impressive the magic is. Friedrich promises his audience that he will show card tricks like you have never seen before. In addition, there will also be mental magic and also a "sawed maiden" - but quite different from what you might expect. Over 17 days, Friedrich will perform a total of 28 shows at the Zeltpalast. He is not afraid that it will be too much for him: "When the audience is there, it's just fun to perform. Stress is really not that many shows then."

But the days that Friedrich does not perform, the tent palace should not stand empty. Therefore, a great and very diverse program was put together, which also includes several TV recordings. Bodo Bach, Bülent Ceylan and star chef Alexander Herrmann will record their performances in this very special intimate atmosphere. Herrmann will perform a total of two times in the tent palace and present a "tent palace special" of his program "Schnell mal was Gutes". The special: unlike in large venues, where this is not possible due to the number of spectators, here every guest will also be able to taste the dishes that Herrmann prepares on the show stage.

The successful job coach and bestselling author Mathias Fischedick will also be at the tent palace with his edutainment show "Survival among colleagues". He promised at the press conference that the audience will not be presented with a dry lecture. "There will be laughter and learning all in one," is how he sums up his show. Also making a guest appearance at the special event location will be cult comedian Maddin Schneider, who will celebrate his 30th anniversary on stage in 2020. Before that, however, there will first be his current programme "Denke macht Koppweh!" at the Commerzbank Arena. Maddin is particularly looking forward to this appearance in Frankfurt, as he already "liked playing in the tent as a klaaner Bubb" and is therefore looking forward to the "gemütlisch-kuscheligge" atmosphere.

Not only good mood, but also a few impulses to change something in their own lives, wants to give the well-known dance coach Detlef Soost with his program "Scheiss drauf - Mach`s einfach!". He finds the date at the end of January perfect for this. Because, says Soost, everyone knows that. One makes oneself on New Year's Eve good resolutions for the new year, which are given up however by 97% already after 14 days again. Soost wants to give his audience the right tools to actually change something. "We don't have forever to do the things we actually still want to achieve in our lives," says Soost. But while that may sound very serious right now, he promises his program will also offer plenty of fun and humor.

Things get musical on Jan. 18, when Jonathan Zelter will make a guest appearance at the Zeltpalast with his LÖWENMUT acoustic tour. Zelter, whose song "Ein Teil von meinem Herzen" has become one of the most popular wedding songs in Germany and has become a sensational hit on YouTube, will not only present the 4 songs of his current acoustic EP at this gig, but also tracks from his latest album and maybe even some from his next album, which is scheduled for release in spring 2020.

Besides these artists who were present at the press event, Bülent Ceylan, Ingo Appelt, Bodo Bach, Hans Söllner as well as Carl Josef & Friends will also perform at the Zeltpalast. If you want to experience entertainment up close, you should secure tickets quickly. Because closer actually does not go!

The program of the tent palace:

More info and tickets at: http://zeltpalast-frankfurt.en/