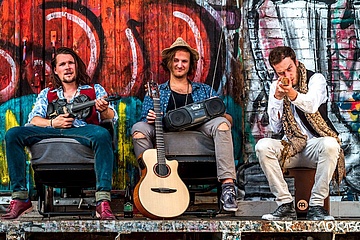 Sometimes there are those special sounds that blend in with the buzz of voices on the streets and turn an ordinary day into a very special one. The band The Trouble Notes manages to do just that. They draw listeners into their spell. It is hard to remain untouched here. The band - that's violinist Bennet Cerven, percussionist Oliver Maguire and guitarist Florian Eisenschmidt - has already gained a loyal fan base in more than 400 shows in various countries. The artists have also been guests at Frankfurt's Sommerwerft Open-Air Festival three times.

The story of The Trouble Notes begins in Brooklyn at a Wall Street investment fund. Here, Bennet Cerven works between 80-100 hours a week. "I had a lot of stress and often a feeling of emptiness. I felt like a small cog in a big machine, not knowing where it would take me," Bennet recounts of that time. At that time he finds compensation in music. He starts playing the violin after work and on weekends in the subways and on the streets: "That was my short escape from everyday life - like a drug that helps to forget the problems and burdens of everyday life for a few hours." Three key experiences then move Cerven to give up his secure and lucrative job and devote himself entirely to his art. First, a trip to Paris, where he completely wows passers-by on the streets. He then has the next key experience when he sees the Broadway musical to the Irish independent film "Once". The story is about a street musician who realizes his dreams of a career as a professional musician. "The story inspired me to say, 'I can do that too!"

The third reason is practical. Fellow musician and friend Oliver Maguire's visa is not renewed, he is not allowed to stay in the US. So the two start their musical journey together in London. "It wasn't easy in the beginning. There were many months where we - my friend and I - had to make ends meet with very little money. We didn't have any CDs to sell, just the money that passers-by in London put in our guitar case. And London is not the cheapest place. But little by little we learned to find our way around, found small clubs to play gigs in and it got easier." Bennet has never regretted the step of leaving his regular life behind. Meanwhile, the two live in Berlin, together with the third band member Florian Eisenschmidt. "If New York is the city of dreams, then Berlin is the city of dreamers," the violinist enthuses. Together they create songs that liquefy the boundaries of genres and make them shine anew in an unexpected yet harmonious way: "The creation of new songs is very closely linked to our band name. Trouble, problems, difficulties and conflicts often form the origin of a song idea." A good example of this is the song "Ghosts of the red sand," which addresses the Israel-Palestine conflict. The song shows that despite all cultural differences, it is possible to combine seemingly irreconcilable things and build bridges.

If you want to see the Trouble Notes live, you should join them at their next gig in Frankfurt on February 22 at the Brotfabrik in Frankfurt. <link https: www.frankfurt-tipp.de veranstaltungen s event the-trouble-notes-1.html _blank>You can get more info HERE

If you want to get a little listening impression, you should click on the following links on youtube: