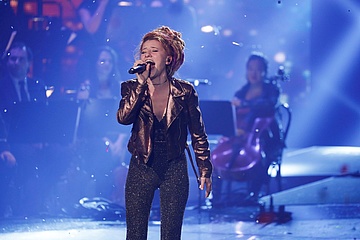 Congratulations, Natia! The 21-year-old Georgian has won the seventh season of the casting show "The Voice of Germany" by a wide margin. Over 50% of the votes went to the strong-voiced contestant from Samu Haber's team. Natia Todua, who has been working as an au pair in Kirchheim near Stuttgart for six months, doesn't have much time to breathe after her victory. Because already from 27.12. she will be live on stage together with the other TVOG finalists Benedikt Köstler, Anna Heimrath and BB Thomaz as well as the two wildcard winners Lara-Samira Will and Gregor Hägele and the great TVOG band. The tour will then also take them to the Jahrhunderthalle Frankfurt on 17 January.

The run on tickets is so great that a good week before the tour starts, three concerts in Bielefeld, Nuremberg and Hamburg are already sold out. In the cities of Bayreuth, Freiburg, Berlin, Ludwigsburg and Frankfurt am Main only a few remaining tickets are available.

Natia, who thrilled the audience with the classic "With a little help from my friends" in the final, has left Georgia because she could not really develop freely there, musically as well as personally. Her goal is to study in Germany, but she needs money to do so. With the participation in "The Voice of Germany" she has come a little closer to her goal.

For Lara-Samira Will and Gregor Hägele, the dream of the big Germany tour also came true. Together with the four finalists and the big live band, the two will tour Germany's venues from 27.12 with "The Voice of Germany - Live in Concert" and bring the cuddly atmosphere from the TV studio to the concert stages. This is because the live show relies on the cosy living room atmosphere for its shows. In the program they have songs from the show, which they present individually, in duets or as a group together with the "The Voice of Germany" live band. Since the second season (2014), the musical stories about Germany's best voices have continued to be written on the big live stage. One thing is for sure: Whether it's the TV show or the tour of the same name: Both touch the hearts of the audience to the same extent, no matter whether it's in front of the TV or in the venue around the corner. In "The Voice of Germany", the only thing that counts is the voice, and in the end, that is supposed to be the best in Germany. Chapeau!

Tickets for the concert in Frankfurt are available HERE