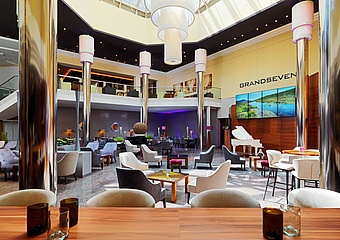 Germany celebrates the 30th anniversary of the fall of the Berlin Wall this year: to this day a symbol of cosmopolitanism and encounters. The opening of the Westin Grand Frankfurt in September 1989 also fell into this historic setting - a house that also brings people together in an international city and invites them to exchange ideas. For example, at the "1989 Brunch" on 15 September 2019, created especially for the anniversary, which kicks off the season at the motions restaurant after the summer break. The regular Sunday brunch also features specials such as the Winemaker Brunch in October, as well as a Game Brunch and a Gospel Brunch in November. For more information, call 069-29810 or www.grandseven.de

Although Berlin was the site of the fall of the Berlin Wall, Frankfurt stands for international flair like few other German cities. The Main metropolis has developed rapidly over the past 30 years - and the Westin Grand Frankfurt is right in the middle of it. The world is also present here in terms of culinary delights. Brunch guests can enjoy this diversity when they start the day at 11.30 a.m. with an aperitif in the GrandSeven restaurant accompanied by live piano music. The birthday special on September 15, 2019 is also especially affordable: in keeping with the anniversary, it costs just 30.30 euros per person.

In the southwest of Germany, the wine harvest is coming up in autumn and with it the time of winegrowers' festivals and Straußwirtschaften: Reason for the hotel to offer its guests a vintner brunch for 69 euros per person on October 6, 2019. The following vintners will be present in person, offer their products for tasting and also for purchase, and answer questions about cultivation and processing: JWG Johannisberger Weinvertrieb KG, Weingut Fritz Allendorf, Weingut Joachim Flick, Weingut Trenz. On November 3, special meats from the local forests will be served at the themed brunch "Wild auf Wild" for 59 euros per person, and on November 24, the brunch for 79 euros will be dedicated to gospel music. On all other Sundays, the extended gourmet meal can be booked for 54 euros per person. There is no charge for children up to the age of six, and children aged seven to twelve pay only half price. In addition to the buffet with numerous starters and main courses as well as desserts and ice cream, drinks are also included in the price. Also included is free parking for three hours in the hotel's underground car park.

The Westin Grand Frankfurt, with its 371 tastefully decorated rooms and suites, is centrally located in the city centre just minutes from the famous Zeil shopping mile. Three restaurants and a bar in the house provide a unique culinary variety. The Westin Club invites guests of certain room categories to work, relax or enjoy a snack. The GrandSeven is known for its excellent cocktails, but also impresses with its international cuisine with, for example, Argentinian premium beef, dry-aged in the hotel's own meat maturation cabinet. Events such as the After Work Parties or SoundBites@GrandSeven round off the offer at GrandSeven. Chinese specialities are on the menu in the SanSan restaurant, Japanese in the Sushimoto. The breakfast restaurant motions can also be booked as an event location or for private parties for lunch or dinner. The popular Sunday brunch also takes place here. For meetings, conferences and festive banquets, there are 13 event rooms with natural daylight to choose from. The Emotion Spa above the roofs of Frankfurt provides relaxation and regeneration with a wide range of beauty and massage treatments. Sports enthusiasts will get their money's worth at the Westin Workout®, open around the clock, with state-of-the-art equipment. www.westingrandfrankfurt.com