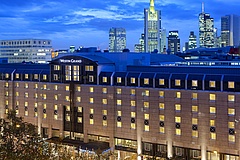 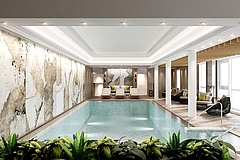 The Westin Grand Frankfurt was closed for nearly two years. After the long period used for extensive renovations, one of the city's most prestigious hotels celebrates its grand reopening on June 1. In the process, the hotel has not only spruced itself up, but also reinvented itself a bit. It wants to be now no longer only a hotel, but an oasis of the Well-Being in the middle in the Frankfurt city center.

This Well-Being concept of The Westin Grand Frankfurt is based on six pillars of well-being: Feel Well, Eat Well, Sleep Well, Move Well, Work Well and Play Well - these are the guiding principles of the hotel brand, which combine the most important needs of all hotel guests at the highest level. Implementing this throughout the hotel was the aim of the major refurbishment. For example, the comfortable Heavenly Bed®, high-quality textiles, a pillow menu, lavender balm, bedtime stories and tips for falling asleep ensure a restful night's sleep. The two rooms equipped with a Peloton Bike are certainly also a special feature. In addition, yoga classes, video yoga sessions, the WestinWORKOUT® Fitness Studio and a Running Concierge, a personal running partner with whom guests can get to know the city and stay fit during their stay, round out the sports-themed Move Well offerings.

The property has 372 rooms where the new room concept has been implemented with a new design. The rooms shine completely renovated in new splendor: flooring in natural colors, new furniture with light wood, wall decoration and a thoughtful lighting concept provide the ideal well-being during the stay. The bathrooms have also been completely renovated and redesigned. In addition to new plumbing fixtures, they feature the Westin Heavenly Shower, a large walk-in shower with rain showerhead. Also included in the remodel was the spa area and fitness center. Further, wellness treatments, sauna, sanarium and an indoor pool also provide Feel Well moments.

Peter Reischl, general manager of The Westin Grand Frankfurt, is excited about the imminent opening: "We can hardly wait to welcome guests back to our hotel. During the renovation, we not only modernized the rooms, but also redesigned other areas, such as the lobby, the spa and the atrium with the restaurant. From floor to ceiling, a new concept is evident here as well. When many people think of Frankfurt, they think first and foremost of the skyline and impressive skyscrapers. But our Main metropolis offers so much more - for example, there are numerous parks and green spaces in the middle of the city. We want to reflect Frankfurt's green diversity in our hotel - that's why, for example, you'll find vertical green walls in our lobby, and natural colors in our rooms to create a sense of coziness. The Atrium is getting a new restaurant concept. The Main Tapas Lounge offers guests a focus on typical local and regional Frankfurt specialties, such as the classic 'Handkäs mit Musik' in tapas form, as the restaurant name suggests."

The lobby is also equipped with a new sofa corner for relaxing and tables for productive work entirely in the spirit of Work Well. In addition, the lobby features a "Grab 'n Go" store that offers fresh, local snacks and drinks throughout.

Arabella Hospitality SE, as operator, and Bayerische Hausbau, as owner of the hotel, together invested a mid-double-digit million euro sum. Joern Siebke of Studio Lux Berlin is responsible for the design. Management remains with Marriott International.

Further information on The Westin Grand Frankfurt can also be found at: www.WestinGrandFrankfurt.com