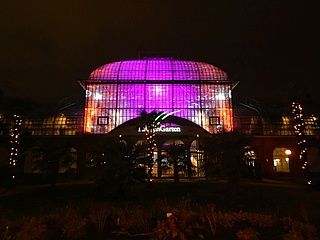 Until 21 January, the Palmengarten will once again be transformed into a sea of lights of a very special kind every evening from 5 pm. After the great success in previous years, the Winter Lights invite you to marvel and dream again this season. Numerous light objects, sound and video installations line the paths in the Palmengarten, adding a truly magical touch to this already beautiful place. After a stressful day at work, this is the perfect place to slow down. For those who don't want to go home just yet after walking along the imaginative WINTERLICHTER adventure path, the Caf&eacute; Winterlichter in the gallery at the Palmenhaus offers the opportunity to relax a little further with cold and hot drinks as well as snacks until 8pm each night.

The WINTER LIGHTERS are a truly wonderful experience every year. The very special atmosphere created by the illumination of the fascinating plant world of the Palmengarten is truly unique. Even those who are already familiar with this exhibition from previous years, and thus already know most of the light installations, will always be enchanted anew.

Who does not want to miss this, has until 21 January daily (except 24 + 31.12.) from 17 to 21 clock the opportunity to dive into the imaginative world of WINTERLICHTER!

Extra for the "Winter Lights", the municipal public transport company traffiQ will again run bus route 75, which circles the Palmengarten, until around 9.30 pm, about two and a half hours longer than usual. It will also take visitors from the Palmengarten exit at Siesmayerstraße to the Bockenheimer Warte, where there are connections in many directions. The 75 continues to evolve: it is no longer just the "Campus Line", but also the "Palmengarten Line".

You can find more info HERE in our event calendar