The woodpecker is dead, but it will come back
from FFM Aktuell 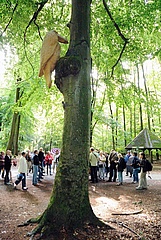 Comic art work in the city forest will be replaced

(kus) The tragedy occurred recently during the storm that swept through Frankfurt. As cellars filled up in the city, a tree fell in the city forest. This alone would not have been worth mentioning if the tree had not caused collateral damage when it fell. Next door lived the monster woodpecker, a work of comic art in the green belt. Yes, it lived, because you can already guess that things didn't end well for the woodpecker.

First of all, the falling tree shaved the artwork designed by F.K. Waechter-designed artwork's beak. That in itself would be bad enough for a woodpecker. But it got even worse: an expert examination of the six-foot-tall creature, crafted from poplar wood by artist Andreas Rohrbach, revealed a harrowing diagnosis: fungal infestation, far advanced.

"He crumbled in our hands," reports Rainer Zimmermann, who is responsible for the Komische Kunst im GrünGürtel at the environmental agency. There was nothing more to do, after eleven years, the monster woodpecker has blessed the time. Bad, Mr. Woodpecker. The fact that days earlier a woodpecker in the flesh had attacked the remains of the artwork and hacked a hole in it should be mentioned as a special irony of fate. Quite hammy.

One need not long mourn the fate of the poor bird, however. For even this ending has a new beginning. The environmental planning department in the environmental office, of which Rainer Zimmermann is the head, has planned ahead and ordered a new woodpecker from the artist Rohrbach some time ago. Again made of poplar wood, again 1.80 meters tall - more or less a clone of the old one.

At the moment it is already being carved, next spring Monster Woodpecker 2 is supposed to take over the place of its predecessor. It will probably still be possible to use the bracket, Zimmermann says. Not bad, Mr. Specht.

So the tragic story of the comic bird has a happy ending and the eleven works of comic art in the GrünGürtel will soon be complete again.