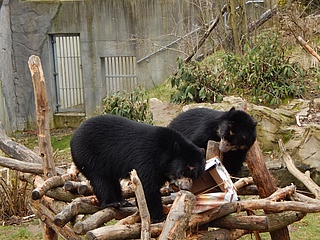 New year, new offspring at the zoo. For the spectacled bears, 2018 started with a particularly nice event: spectacled bear Cashu had offspring on 14 January. He can't be seen yet, but his squealing can already be heard from the litter box.

There had been signs for some time that Cashu was pregnant: she was lethargic and did not want to go outside. The behavior was obvious, but then nothing happened at first. But all false alarm? No, because on January 12th Cashu settled down in the whelping box and padded it with straw. A quiet squeak on 14 January indicated that Cashu had had kittens. It is still completely unclear how many cubs are involved.

A spectacled bear usually gives birth to one to two cubs, and in rare cases four. At the beginning they are blind and almost naked. Only after about four weeks do they open their eyes, and at about twelve weeks they leave the protective den for the first time.

"I am very pleased - the first animal birth in the new year and then such a special one!", says Ina Hartwig, Head of Department for Culture and Science. "A significant breeding success, because in their homeland, the Andes of South America, the spectacled bears are endangered by habitat loss and climate change, among other things. Now we have to be a little patient - it will surely be a few months before we can see the offspring in the outdoor enclosure."

The 15-year-old Cashu has had offspring for the third time. She had her first cub at Zurich Zoo in 2007. On December 25, 2013, she gave birth to twins Tupa and Sonco in Frankfurt. She came from Zurich Zoo already pregnant. The two cubs quickly became crowd pleasers thanks to their acrobatic climbing skills. The father of the current offspring is Nobody, also 15 years old, who also came to Frankfurt in 2013