The zoo takes stock of 2018
from FFM Aktuell 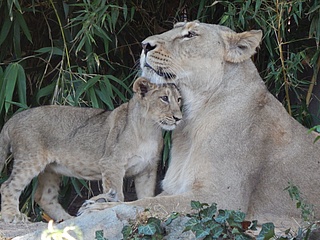 (ffm) At the beginning of the year, counts are taken at Frankfurt Zoo, databases are read out and statistics are checked. Particularly time-consuming is the inventory of the animal population as of 31 December. However, the developments in visitor numbers, animal sponsorships and the offers of the educational department as well as special events in the past year are also considered.

868,799 visitors came to the zoo last year - 32,629 more than in 2017; that's a 3.9 percent increase. This continues the positive trend from the previous year. Heat and drought caused slightly fewer visitors in the months of July and August, but September was already back with an increase of 35 percent.

Overshadowing the zoo year was a tragic accident in which a two-year-old boy drowned in a ditch near the camels in June. In December 2018, the investigation was dropped by the public prosecutor's office.

In 2018, the interest in the guided tours offered by the Education Department was again high. Despite the hot summer, 15,000 participants took part in around 1000 guided tours. There was an increase in school tours for high school classes. The topic "Social Behaviour of Primates", which focuses on the behavioural observation of baboons, is an informative addition to lessons for many teachers. There was also a significant increase in the number of children's birthday tours. During these tours, children learn interesting facts about their favourite animals. In contrast to 2017, significantly more boys than girls celebrated their birthdays at the Zoo this time. The children's animal favourites were again the seals, the lion family, giraffes and monkeys.

Valuable support: animal sponsorships, volunteering and the work of the Frankfurt Zoo Foundation

Once again, the Zoo received a great deal of support from animal sponsors in 2018. 2253 sponsors took on 2672 animal sponsorships - which is once again a significant increase on the previous year. Around 210,000 euros in donations through sponsorship contributions were raised in this way. The income flows into measures and projects for the improvement of animal husbandry.

Last year saw an increase in the number of volunteer nature conservation ambassadors at Frankfurt Zoo and Zoological Society. Now 46 committed nature lovers provided information on nature and species conservation topics during 638 assignments in and outside the zoo. A total of 2552 hours of voluntary work were completed. No less committed were the volunteers, without whom the Zoo could not manage the many small and large events.

In June, the Board of the Frankfurt Zoo Foundation was elected in rotation, after Zoo Director Miguel Casares had already taken over the office of Chairman of the Board from his predecessor, Professor Manfred Niekisch, in April. The foundation supports the zoo in the realisation of environmental education and animal husbandry projects. The current focus is on the conversion of the lions' outdoor enclosure. The foundation has already provided 75,000 euros for the planning of the conversion.

"I would like to express my sincere thanks for all the support! This is far more than concrete help in the implementation of projects in animal husbandry and events - it shows the great attachment of many people to the zoo and its animals. It's an especially valuable resource for the Zoo's future development," said Director Casares.

There were many welcome births among mammals in 2018. At the top of the visitors' favourites were the little spectacled bears Manu and Suyana and the lion triplets Yaro, Kiron and Mira, who were born in April. In the summer, there were offspring among others of the giant anteaters, the aardvarks, fingered animals and the fossa, and in October orangutan Rosa gave birth to a cub. As of the December 31 inventory date, mammals at the zoo numbered 1120 individuals across 88 species. Binturong and mousopossum were added as new species in 2018.

On 31 December, 285 birds in 81 species were living at Frankfurt Zoo. The offspring of New Zealand kiwis and the highly endangered rice finches are particularly valuable. A highlight in December was the arrival of 19 Humboldt penguins in the Exotarium. They temporarily took the place of the gentoo penguins, which will no longer be kept at Frankfurt Zoo. When work on the new penguin enclosure is completed in spring, the new arrivals will move into their new enclosure.

In addition to the penguins, a total of 305 other animal species were on display at the Exotarium in 2018. Counting individuals here is particularly difficult and, for some species, impossible. For example, some species live in states or colonies, which are counted as one individual in the inventory. In addition, invertebrates, for example corals, anemones, giant psyllids and rose beetles, are represented in 70 species - again, no one can keep track when counting. Especially since it's not really necessary. If a population remains stable, everything is fine. There are also animals in the exotarium that move around completely freely, such as fan-fingered geckos and whistling frogs - their numbers are also uncertain. In total, however, there will be well over 3000 animals populating the exotarium.

ZOOKUNFT 2030+: The zoo is getting ready for the future

In autumn 2018, the zoo began work on the concept study "ZOOKUNFT 2030+ - Development Plan for the Zoo of the City of Frankfurt am Main. Together with the planning office The Logical Zoo - Zoo and Aquarium Design & Consultancy - and the Frankfurt Zoological Society (ZGF), the team led by Zoo Director Casares is developing a vision for the redesign of the zoo over the next 15 years. The results are to be presented in the spring.

The concept study will then serve as the basis for a master plan in which designs, timelines and costs will be fleshed out. "The attendance numbers show it: our zoo is very popular! We must seize the opportunity to inspire people in the heart of the city in a contemporary way for nature and species conservation. The zoo needs a future and the master plan lays the foundation for a necessary redesign of this popular cultural institution," says Ina Hartwig, Head of Department for Culture and Science.

In 1993, the 135th Annual Report of the Frankfurt Zoo was published - the last of its kind for over 20 years. Zoo director Casares wants to use the anniversary year 2018 - the zoo celebrated its 160th birthday - as an opportunity to reintroduce the Zoo Annual Report. Designed in the style of a magazine, it will be published during the second quarter. In it, the zoo's individual divisions and departments will present their activities and projects over the past year and provide interesting key figures.