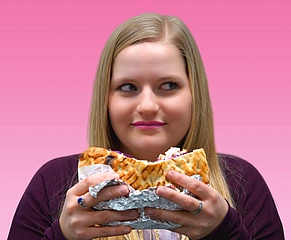 It's an important theme that screenwriter and playwright Neil LaBute addresses in his Broadway success "Fat Pig." His play, ostensibly a romantic comedy, is about beauty obsession, conformity compulsion and perfectionism. Tom (Tim Grothe) falls in love with the librarian Helen (Franziska Langer). And how could he not, after all she is smart, pretty and wonderfully quick-witted. However, she has a few too many pounds on her hips and that could be a problem for Tom. As much as he enjoys his time with Helen, he doesn't want his chauvinistic colleague Carter (Jan Peter Nowak) and his ex-girlfriend Jenny (Sabrina Faber) to know that his dream girl doesn't look like a top model. While Helen is completely at peace with her weight and just wants to enjoy her happiness with Tom, he is threatened by the pressure of the outside world to break up. Does their relationship stand a chance at all?

LaBute's play is a merciless reckoning with a society guided by beauty ideals. He puts his finger in the wound, but does not forget to make his audience laugh. The dialogues are at times very biting and manage to humorously wrap up a problem that is in itself very serious and deeply rooted in society. Thanks to the great chemistry between Franziska Langer and Tim Grothe, one wishes with all one's heart for Helen and Tom to overcome his problems, his fears of others' opinions, so that there can be a happy ending for them.

But besides the two main actors, their two colleagues Jan Peter Nowak and Sabrina Faber also deserve very high praise for their performance. The greatest compliment Faber received for her portrayal of the not-so-nice Jenny at the premiere came from a lady in the audience, who asked in complete amazement: "Isn't that the woman who served me at the counter earlier? She was so nice."

"Fettes Schwein," as the play is called in German, is often referred to as a comedy. But the play also has very dark sides, which you think about for a long time at the end. But it is the mark of a good play when it reaches several emotional levels and offers not only pure entertainment, but also something like real relevance. And that is clearly the case here.