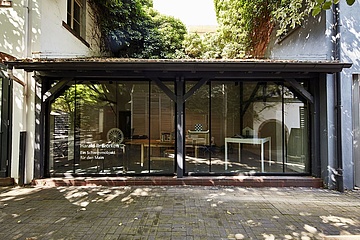 (ffm) Since summer 2017, vacant shop spaces in the core area of Fechenheim have been put to interim use with creative usage concepts for three months at a time under the title "Quartier Machen". After the projects "Work/Shop" in Alt-Fechenheim 89 and "Play with Clay" in Starkenburger Straße 56, the third project is now opening its doors in Leinwebergasse 4-6.

Since the beginning of May, sculptor and designer Harald Brörken has been using the space as a studio to plan and build a floating object for the Main River. In the planned project, the river, its power and movement, will be visually and sensually perceptible in yet another way. The development can be experienced by everyone. Through the shop window from the outside, as well as in direct conversation with the artist in the project space itself.

"The goal is to set a sustainable creative and exemplary impulse for the development of the district," explains Planning Director Mike Josef. The respective concepts can come from all creative disciplines and their border areas: Pop-up shops, art projects to research projects. The implementation will be supported with a budget. "Each concept should serve as a meeting place for citizens to discover new things as well as encourage them to participate and become active," says Josef. "Furthermore, if there is mutual interest between the user and the owner, it can also lead to a permanent tenancy."

Harald Brörken would like to transform the movement of the river, for which there are many different possibilities. These are to be developed in the course of the interim use. The population of Fechenheim is cordially invited to participate in this process. Once completed, the artwork will be installed on the Fechenheimer Ufer and powered by the Main.

The studio Leinwebergasse 4-6 has no fixed opening hours, but the artist is usually available on site during the week at usual working hours.