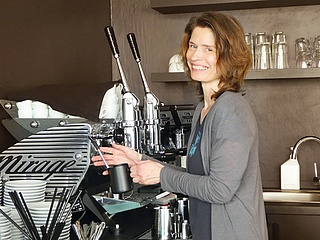 "I've always had the most coffee machines in my circle of acquaintances," says Anja Kürschner. Now the managing director of a communications agency has realized her (coffee) dream - and after two years working in the Caf&eacute; of the Frankfurt coffee roaster Hoppenworth & Ploch opened her own third-wave coffee bar "kaffeegunst" in the Alter Ort in Neu-Isenburg. And that's just the beginning of a never-ending love affair with coffee.

good ten different machines or ways to prepare coffee, Anja Kürschner can offer guests in her private household in the best of times. She has now turned her endless passion for coffee and coffee beans into a professional passion. Because after numerous seminars, further training and workshops with various coffee gurus in Germany, she offered espresso seminars herself for the first time three years ago. "That's when I completely got the taste for turning my love of coffee into a career," says the mother of two and managing director of the Wortwahl communications agency in Neu-Isenburg. That's why she subsequently joined Caf&eacute; the Frankfurt roastery Hoppenworth & Ploch as an employee alongside her agency work, and in two years has made it into a coffee expert who also holds coffee tastings, known as cupping in professional circles.

A year's search for a retail shop

After more than a year of intensive searching in the Rhine-Main area, she finally found an appealing, small retail shop in Neu-Isenburg's Alter Ort. "It was incredibly important for me to find a nice place where guests feel comfortable. The Alte Ort in Neu-Isenburg is perfect for this," says Anja Kürschner. She spent almost six months completely renovating and remodeling the 20-square-meter shop, which had previously been converted into an office. Now the Third Wave coffee bar "kaffeegunst" at Kronengasse 18 is the place to go for all lovers of frahling.

"Third wave stands for the third wave of coffee development. After filter coffee as the first wave came fully automatic coffee machines as the second wave. Now with the third wave, the focus is on the enjoyment and taste variety of coffee, as well as transparency from the bush to the cup," explains Anja Kürschner. Because of the high value that the graduate in business administration places on craftsmanship and quality in coffee preparation, she has purchased a two-group manual lever machine with which she prepares espresso and all espresso-milk drinks for her guests. Anja Kürschner has two speciality coffees from the Frankfurt roasters Backyard Coffee and Hoppenworth & Ploch permanently on her grinders. In addition, guests can buy other different coffee beans for filter coffee or espresso, which cover the wide spectrum of coffee variety - something for every taste. Accessories for brewing such as V60 filters or AeroPress are also on the shelf.

Workshops and seminars: Anja Kürschner still has a lot planned

"Food and delicatessen have been with me all my life because they were practically in my cradle," says Anja Kürschner, who grew up in the Odenwald region as the daughter of a vegetable wholesaler and moved to the Rhine-Main area after studying in Worms. At her coffee bar, which is initially open on Fridays and Saturdays, she also offers workshops for espresso, cappuccino and frahling lovers. "I want to give coffee fans the chance to pull their own espresso shots under supervision on a professional hand lever machine. That's something special," emphasizes Anja Kürschner, adding, "Espresso lessons, milk foaming and latte art, where beautiful pictures are poured into the espresso, are also very popular with coffee connoisseurs."

The coffee bar is set to open more days soon. "The Old Place in Neu-Isen-burg just has flair. It would be nice if other speciality shops in the town would provide a varied offer. The town and its citizens deserve that, especially since many people from Frankfurt also come here. I hope to contribute a little to this and would also like to expand my coffee offer according to the wishes of the guests, because what could be better than satisfied guests?"