This is madness! Frankfurt celebrates the Wolfgang Petry Musical
from FFM Aktuell 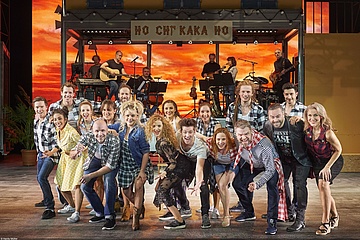 A musical consisting of 25 songs by pop rocker Wolfgang Petry? You can only take that if you're a fan, right? Sure enough, it was the Petry fans who sang along and cheered the loudest at the big Frankfurt premiere of the musical DAS IST WAHNSINN! on Tuesday at the Jahrhunderthalle. The two actors Jessica Kessler and Markus Dietz are sure: You don't have to be a fan to have fun with this musical. They play the married couple Gabi and Karsten, one of four couples whose stories are told in the humorous musical. They are the parents of Tobi, who dreams of making a career as a musician - unlike his dad, who disappeared into obscurity after a hit many years ago. Together with his new flame Gianna he runs away to Bahia del Sol, where he has been hired for a first gig. They are taken along by truck driver Peter, who is desperately trying to save his marriage with Sabine, who has separated from him and is now on a singles holiday at the Hotel Casa del Sol. The proprietor is Jessica, an old summer sweetheart of Wolf, Peter's best friend.

"The play simply has everything," Markus Dietz and Jessica Kessler agree. The audience can laugh heartily, for example when Peter visits a support group for broken hearts or confronts Sabine during a yoga class. You can sing along, but also get a little goosebump here and there. "I love our ballad," Jessica Kessler reveals to us, who provides a truly moving moment with her stage partner on the song "None of the Above." "Some of the songs are completely new arrangements. There's something for everyone," Markus Dietz is sure. "And by the final medley at the latest, everyone is a Wolle fan," adds his musical wife with a laugh. "The songs just get into your ears, you can't do anything about that," she says and then reveals to us that even the ensemble members, who are not from Germany and didn't know a single Wolfgang Petry song before, now sing the songs all the time.

In fact, the musical works especially because it gives the audience pure good humor for two hours. You simply can't escape it. At the Frankfurt premiere, many plaid shirts and friendship ribbons could be seen, but there were also many spectators who would not necessarily call themselves a fan - only to be surprised to discover how many songs by Wolfgang Petry they know. And then you find yourself singing along happily and letting yourself be infected by the good mood in the hall. And so Markus Dietz and Jessica Kessler were absolutely thrilled by the Frankfurt audience after the show: "Simply awesome" was their summary. The first performance in the Main metropolis took a little getting used to: "Up to now we have always played directly to the audience and felt the reactions immediately," says Kessler, who as Gabi was already part of the original cast of the musical. In the Jahrhunderthalle there is a certain distance to the audience due to a proscenium, so that they didn't even notice how the play was received here. But at the latest during smash hits like "Der Himmel brennt", "Scheissegal" or of course during "Wahnsinn" this distance was overcome, when the clapping and the loud singing along made the dome of the Jahrhunderthalle shake.

An ensemble that can convince both acting and singing, a great live band, rousing arrangements and a beautiful as well as amusing story about friendship and family, love and missed dreams - This is insanity! And insanely good. So, even if you wouldn't call yourself a Wolfgang Petry fan, but you like good mood musicals, you shouldn't miss this guest performance. DAS IST WAHNSINN! can be seen in the Jahrhunderthalle until 24 February and the entire ensemble is looking forward to providing the people of Frankfurt with lots of good humour over the next few days. And maybe there will be some time left to have a look at our beautiful city. "with all the hustle and bustle I also enjoy the peace and quiet in my hotel room", Markus Dietz reveals and immediately adds: "But of a city like Frankfurt you just have to see a little bit." We can only confirm that and wish the whole team of DAS IST WAHNSINN! another great time in Frankfurt!