This is the vaccination strategy for Hesse
from FFM Aktuell 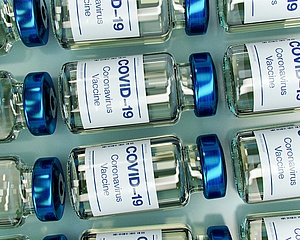 There are still many open questions: When will the first vaccine against the coronavirus be licensed in Germany? When can the first vaccinations be started? Who will be vaccinated first? And where can one get vaccinated in the future? Nothing is quite certain yet - but it looks good. And since one wants to be prepared for all eventualities - such as a vaccination start as early as December - Hesse's Prime Minister Volker Bouffier, Social Minister Kai Klose and Interior Minister Peter Beuth today presented the Hessian vaccination strategy.

It becomes clear: the signs are optimistic despite the great challenges that the virus currently poses to us. For example, the federal government currently expects to be able to provide the first vaccine against the Corona virus starting around mid-December 2020. That's only a few weeks away, so there is of course a need to act quickly to create the infrastructure necessary to carry out the required millions of vaccinations in Hesse in the short term. Because the vaccinations are a mammoth task that will take months.

The Prime Minister of Hesse, Volker Bouffier, explained at the press conference: "Hesse is preparing at full speed for the vaccination of about 4 million people. According to prevailing expert opinion, a vaccination rate of about 60 percent is necessary to effectively counter the pandemic. We are making the best possible preparations for the time when a vaccine is licensed, so that we can then efficiently manage the mammoth task of this huge logistical challenge. Once the federal government has delivered the vaccines, citizens will be invited to get vaccinated as close to home as possible. The more people who participate, the more successfully and quickly we will be able to conquer the pandemic. Protecting the population in our country from the virus, even with a vaccine, is a task of national importance." Bouffier stressed at the same time that this "ray of light on the horizon" should not distract from the fact that the infection figures are currently still too high and that everyone must continue to adhere in a disciplined manner to the measures that are ever in place.

The crisis team of the Hessian state government has instructed the districts and independent cities with their health offices and lower disaster control authorities to set up vaccination centers throughout the state. At least one contact point is to be provided for each county and independent city in Hesse with the support of the Hessian relief organizations, the Technical Relief Organization and the German Armed Forces.

"The vaccination is a voluntary offer"

Social Affairs and Integration Minister Kai Klose once again emphasized that vaccine doses can not be immediately available for everyone. "That is why we are following the National Vaccination Strategy by establishing vaccination centres and then vaccinating targeted groups of people, step by step," Klose said. "The groups to be vaccinated as a priority include people who, due to their age or pre-existing health condition, have a greatly increased risk of a serious or fatal course of the disease, then for example employees of inpatient or outpatient health care facilities and care for the elderly," the minister summarized. As long as there is not enough vaccine available for the entire population, vaccinations will be issued to target groups previously determined by the federal government on a prioritized basis, based on the recommendations of the Permanent Vaccination Commission, the German Ethics Council and the Leopoldina National Academy of Sciences.

In view of constant protests and conspiracy theories, Klose also emphasized once again: "Vaccination is a voluntary offer that can develop its full effect if as many people as possible accept the offer. The more citizens are vaccinated against infection with the Corona virus, the fewer people will die from this insidious infectious disease. For the men and women in the health sector, implementing the national immunization strategy is another major feat over a long period of time. To support this important task and coordinate all issues related to Corona vaccination, we have set up a dedicated task force within the state government's crisis unit, which is available to all partners."

"The statewide vaccination centers will be points of contact for several million Hessians. In order for the largest vaccination campaign in the history of our state to succeed, extensive logistical and organizational preparations are necessary, with which we are entering the concrete implementation today. The counties and independent cities in Hesse will be supported in setting up the vaccination centres by the voluntary forces of the disaster control units. We are very grateful to the men and women of the aid organizations for their great commitment in the fight against Corona," said Hesse Interior Minister Peter Beuth.

In order to be able to carry out the vaccinations efficiently, vaccinations are to be given seven days a week. In each of the centers, vaccinations are to be carried out at a rate of about 1,000 per day. "To ensure that everything runs in a structured and orderly manner, people will be invited to the vaccinations and informed about the exact procedure on site," Social Affairs and Integration Minister Klose indicated. He added that the comprehensive information, accompaniment and medical care surrounding the vaccination were of utmost importance. "We want everyone who gets vaccinated to know that they will be accompanied in the best possible way," he underlined.

Appointment coordination and documentation through an IT solution

Medical professionals should be recruited through external service providers (e.g. German Red Cross) and through the Association of Statutory Health Insurance Physicians or the State Medical Association, he said. The readiness of the physicians is central for the success of this large-scale vaccination campaign, because the actual vaccination is always preceded by a vaccination discussion. The KV Hessen is confident about the recruitment of personnel. As in the first wave of the Corona pandemic, for example, doctors who have already retired are to be recruited. The country will ensure that the vaccine is available in the centres and will also procure materials such as syringes, needles, swabs and plasters, as well as protective equipment for the medical staff. An IT solution is used to coordinate appointments and document vaccinations on site.

Never before in the history of the Federal Republic has there been a need to protect so many people from an infectious disease as with the threat of the Corona virus. The Federal Government has therefore adopted a "National Vaccination Strategy COVID-19" and will make the appropriate vaccines available once they have been approved by the Paul Ehrlich Institute. It is the responsibility of the federal states to ensure that the protective vaccine reaches where it is needed: on the ground in the communities.

Crisis staff of more than 70 established

.The Hessian state government has established the Task Force Vaccination Coordination (TFI) of the crisis team in coordination with the Association of Statutory Health Insurance Physicians of Hesse (KVH) and the municipal umbrella organizations to organize the complex logistics and to support the counties and independent cities. The unit consists of more than 70 employees of the state administration as well as other experts from the health sector and civil protection. The establishment of the regional vaccination centers was preceded by numerous discussions of the Task Force with the federal government, which is responsible for the national vaccination strategy, the counties, cities and municipalities as well as the Association of Statutory Health Insurance Physicians of Hesse and the State Medical Association.

As soon as vaccines against the Corona virus are available, they should - according to the prioritization of the federal government - also be used in Hesse as soon as possible in order to protect citizens from infection. The TFI has also provided the health authorities and lower disaster control authorities of the municipalities with extensive information and advice on the establishment and operation of the municipal contact points. They are now being set up statewide in close coordination with the Task Force.