This must be celebrated: 30 years of Erzeugermarkt Konstablerwache
from FFM Aktuell 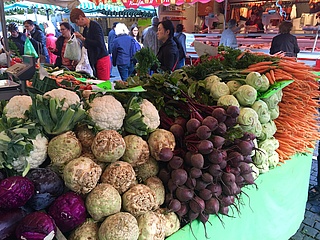 Anniversary celebration on October 3 from 10 am to 6 pm

In Frankfurt there are numerous beautiful weekly markets. But hardly any is as popular as the Erzeugermarkt on the Konstablerwache, which offers fresh goods from the region every Thursday and Saturday. Now the market is celebrating a big anniversary: The Erzeugermarkt, about which there are not only numerous TV reports, but also its own book, has now been taking place for 30 years. Those involved are celebrating this anniversary with a big market festival on Thursday, 3 October, from 10 am to 6 pm. In the middle of the square, numerous seating areas will invite visitors to linger and enjoy the food and drink on offer. In addition, workshops, information booths, panel discussions, live music, a petting zoo and a historic children's carousel will provide not only information but also great entertainment that day.

The department head responsible for Frankfurt's market system, City Councillor Markus Frank, stated during a press conference on Thursday, September 12: "The topic of direct marketing with all its facets has long been of great importance to Frankfurt residents. From both an economic and an ecological point of view, this weekly market is a great enrichment for the city and its citizens. Goods can be sold by their producers without having to pay taxes to middlemen and without having to travel long distances. Customers benefit from the quality and freshness of the goods, as well as from the competence of their traders at the weekly market. I am therefore particularly looking forward to the anniversary celebration and cordially invite everyone to celebrate together with those involved on 3 October."

Let's get started on October 3 at 10am with the opening of the market. At 11 a.m., Councilman Frank will address anniversary guests. From 12 o'clock there will be live music and at 1 o'clock Lord Mayor Peter Feldmann will welcome the festive audience. This will be followed by a panel discussion with Annegret Grafen (co-founder of the Frankfurt Market Association), Thomas Wolff (Frankfurt Market Association), Hans-Georg Dannert (Environment Department of the City of Frankfurt), Beatrix Tappeser (State Secretary in the Hessian Ministry for the Environment, Climate Protection, Agriculture and Consumer Protection). From 15 to 17 o'clock live music accompanies again the market celebration and starting from 17 o'clock the celebration gradually sounds out.

Who would like to experience the producer market times in somewhat different kind and with all involved ones the anniversary to celebrate wants, which should mark itself the 3. October thickly in the calendar!