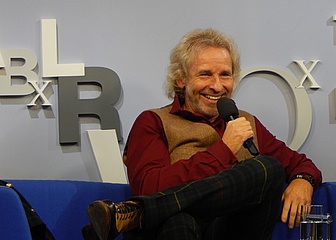 The work of the association KinderEngel RheinMain e.V. is not always easy, but so tremendously important. True to the motto "Give a little light", the association, founded in April 2020 in Frankfurt, supports children and young people with severe or life-shortening illnesses, as well as their families, to make their daily lives a little easier. This is not always easy - especially during the Corona pandemic. But of course the KinderEngel RheinMain do not let this stop them. Now they have received prominent support: From TV legend Thomas Gottschalk!

In the RTL show "Because they don't know what's happening - The Jauch-Gottschalk-Schöneberger Show", Thomas Gottschalk, Günther Jauch and Barbara Schöneberger have to face tasks and opponents* that are unknown to them beforehand. After eight rounds of play, it's all up for grabs in the final: €50,000 for a good cause - €40,000 for the winning team and €10,000 for the runners-up. Yesterday's show, however, was a little different than usual, as Günther Jauch had to cancel a TV appearance for the first time in 31 years due to a Corona infection. Therefore, eight prominent ladies hidden behind Jauch masks were on hand as substitutes to assist Gottschalk in the games against actress Caroline Frier and long-distance runner Sabrina Mockenhaupt - including Motsi Mabuse, Sonja Zietlow, Laura Wontorra and even Amira Pocher. The TV dinosaur then also chose the latter as her partner for the final match.

The sisters Anja Nickel and Petra Bickermann, who founded the club together with six other ladies, were after a short intro at the beginning of the show, in which the work of the club was presented, in the course of the evening again and again switched on and you could see how they were cheering along in front of the TV. At 0:41 o'clock, after a long final game, it was finally clear: Team Gottschalk had won and the 40,000 Euro winner's prize went to the KinderEngel RheinMain. We congratulate all involved for this victory and the associated financial support.

More info about the club and its really great and important work can be found at: https://kinderengel-rheinmain.de/