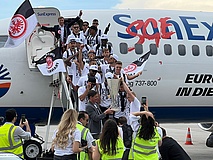 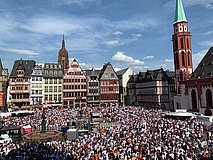 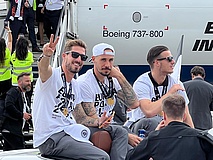 Frankfurt hasn't seen anything like this in a long time: since the early hours of midday on Thursday, Römerberg was filled with fans who wanted to cheer on their Eintracht after the great victory in the UEFA Europa League final in Seville, Spain, against Rangers from Glasgow. There was plenty of reason to celebrate: not only did Eintracht clinch its first international title since 1980. With its victory, the SGE also secured its ticket to next year's Champions League. There's no question about it: yesterday, Eintracht history was made - and the big victory celebration in Frankfurt should more than do it justice. But first, a lot of patience was required in midsummer temperatures, because the plane with the team on board did not land until 5:44 p.m. in the cargo area of Frankfurt Airport. After a befitting welcome by, among others, the airport fire department, a motorcade set off shortly after 6 p.m. in the direction of the city center.

From the convertibles, the players - similar to 2018 - were already greeted and celebrated along the route by several tens of thousands of fans. At the same time, the now completely full Römerberg was closed. Those who still wanted to follow the action had to move to Roßmarkt and Goetheplatz, where large screens were also set up. But anyone who thinks that the crowds, the long wait, or the rain that began to fall would have dampened the mood of the 100,000 or so people along the route and in the city center in the slightest is unfamiliar with Eintracht fans. Until the arrival of the team at the Römer around 9 p.m., people sang, hugged each other and celebrated. And when Eintracht then finally at 21:34 - accompanied by the new Sven Väth track "Celebrate Eintracht" - stepped out onto the balcony with the cup, there was finally no holding back!

At the latest, when captain Sebastian Rode presented the cup to the cheering crowd and shouted "This is for you," that was a moment for which the long wait had really been worth it. And also when goalkeeper Kevin Trapp, who had once again shown a great performance at world-class level in the final, or Danny da Costa, who will soon leave Eintracht, addressed the cheering crowd, these were real goosebump moments, accompanied by loud cheering and singing. It was nice that - with a few sad exceptions - it remained largely peaceful the whole time despite the thousands of people. It was not until around 11 p.m. that the city center slowly began to empty. But everywhere - on the streets, in the trains or even at the main station - fan chants could still be heard for a long time. This day will certainly not only the fans, but especially the team of Eintracht long not forgotten! Thanks, guys!