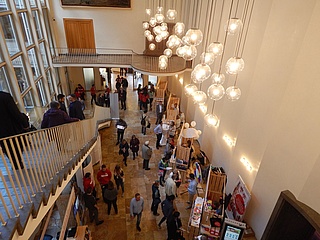 (kus) Two days, thousands of visitors and a venue steeped in history: the open days at Römer Town Hall on Friday, 27, and Saturday, 28 October, attracted thousands of Frankfurt residents to Römerberg and Frankfurt City Hall. Lord Mayor Peter Feldmann described the open days as a "great opportunity for all Frankfurt residents to visit Frankfurt's city hall without any time pressure and to talk informally with representatives of the city administration. These were two days that will be remembered and prove how strongly the city community identifies with its Römer," summed up the Lord Mayor.

On both days, Römer Town Hall, which was built in 1405, was open to all visitors from morning to night. More than 30 offices and municipal institutions presented themselves in the Römer and the Schwanenhalle. The dialogue bakery on the first floor of the town hall was particularly popular. There, department heads and city councillors donned their aprons to talk to visitors about their day-to-day political business while decorating muffins and to address the concerns of their discussion partners. The Dialogue Bakery was moderated by HR journalist Marion Kuchenny.

In turn, representatives of Frankfurt's 16 local councils made guest appearances in the Limpurgsaal and talked to citizens from their respective districts at a district picnic moderated by Mechthild Harting. "We are not an anonymous administrative apparatus, but want to be human and close to the concerns and concerns of our citizens," praised Mayor Feldmann the commitment of the district politicians. The fact that the Römer was extremely well attended on both days illustrates "how great the political interest of Frankfurt's urban society continues to be", said Feldmann.

The Traussaal, the Kaisersaal and the Magistratssitzungssaal were also open to visitors on both days. These were enthusiastic and impressed by the exclusive insights into the innermost workings of Frankfurt's city administration. When Eintracht players Danny Blum and Danny da Costa stopped by the Kaisersaal for a chat, there was no stopping many football fans. Legendary trainer Dragoslav Stepanovic, the players of the 1st FFC Frankfurt and the players of FSV Frankfurt also presented themselves as stars to touch. For city councillor Stephan Siegler, the visit of the FSV professionals was a welcome opportunity to encourage those present to support his heart's club on and off the pitch to the best of their ability. Siegler underlined the sporting value that not only Eintracht but also FSV had for the city of Frankfurt.

In addition to the 15,000 or so visitors, hundreds of municipal employees were also on duty in and around the Römer on both days. "I would like to thank all the volunteers, the many Römer ambassadors and the public relations department who ensured that the open days ran smoothly," said Tarkan Akman, head of the Office of Communications and City Marketing, which organised the open days. "Thanks to this great team effort, the open days were a great success for us and a welcome opportunity for everyone who has always wanted to get to know the Römer a little better," Akman said.

Lord Mayor Peter Feldmann also mingled with the crowds on both days and got his own impression of the varied program. During his tour, however, the Lord Mayor hardly moved from the spot. Every few meters there were hands to shake and old acquaintances to hug. When the head of the city was about to go into the Ratskeller, Valentina Kiefer took the opportunity to get a snapshot with Peter Feldmann. "I am insanely happy about this photo. I have seen Mr Feldmann many times, but have never been able to speak to him in person. Also, City Hall is just a spectacular building. This is a great opportunity to take a look at it from the inside," said Kiefer, who had been exploring the Römer for hours before grabbing her photo with the Lord Mayor.

The Chinese children's dance group from the Kongyan dance school also took the opportunity for a souvenir photo with the Lord Mayor. Earlier, the dance group performed on the big stage in the Ratskeller. There, already on Friday, dancer "Be Shoo" and the rappers "Azzis mit Herz" entertained the audience. HR presenter Tim Frühling led through the program and welcomed exciting guests to talk rounds on stage. In addition to numerous guided tours through the Römer and over the Römerberg, the stage program left nothing to be desired.

A special highlight was the humorous-historical re-enactment of the first city council meeting of 150 years ago. For this, the city was able to win over dialect poet and actor Michael Quast from the Fliegende Volksbühne