To the Musikmesse: The Legacy Sounds goes Neon
from FFM Aktuell 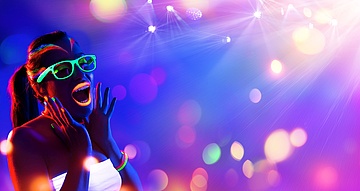 The Frankfurt Musikmesse does not only take place on the exhibition grounds. The Musikmesse-Festival also carries them all over the city. Besides clubs and other concert locations, bars and hotels are also part of the festival. On two trade fair evenings, The Legacy Bar and Grill in Frankfurt's Bahnhofsviertel will become a hotspot for the music scene, even though two events in the event series The Legacy Sounds will rise: On the 5th and 6th of April it's preclubbing to exciting neon effects at Schwarzlicht with DJ and drinks, with electronic beats and classics of the 80s and 90s in all facets.

The Legacy Bar and Grill brings you two exclusive nights in the atmospheric bar area: on Friday, April 5th, DJ Lunis will play in the hip location, on Saturday, April 6th, DJ Fizzy will make the party people dance. DJ Lunis is an integral part of the German club scene and combines in his open format performance different music styles with his own soundtrack. An institution of Frankfurt's nightlife is DJ Fizzy, who immediately puts the audience in a good mood with his music mix.

The Legacy Sounds is a series of events where cocktail lovers and party fans alike get their money's worth: at the Bar Mixologist-Kreationen and Smoked Cocktails by Barchef Miguel and his team, on the dance floor surprising colour effects with black light and cool music. For two years now, The Legacy has been one of the nightlife hotspots in the station district; the stylish location with its casual atmosphere has made a name for itself with smoked cocktails as well as spare ribs and pulled pork from the smoker.

Further information can be found at www.thelegacyfrankfurt.com