Topping-out ceremony for the new Old Town
from FFM Aktuell 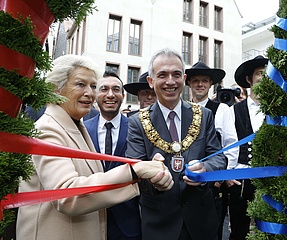 (kus) With a ceremony and guided tours for citizens, the city of Frankfurt celebrated the topping-out ceremony for the new Old Town on Saturday, October 15. For the first time, the construction site between the cathedral and the Römer was opened along the "Coronation Path", which was lowered to its historical level in the course of the construction work. The emperors of the Holy Roman Empire of the German Nation once walked along this path between the coronation in the cathedral and the celebrations in the Römer. On 15 October, guests and citizens were given an impression from it of what the 35 Old Town buildings - 15 of them reconstructions and 20 new buildings - will look like when they open in 2018. During the topping-out ceremony, Lord Mayor Peter Feldmann described the reconstruction of Frankfurt's Old Town as a "project of the century", with which the city acknowledges its own historical roots and its urban history. Feldmann was pleased to personally lead the first groups of visitors along the historic pathways.

Together with head of planning Mike Josef and the managing director of DomRömer GmbH, Michael Guntersdorf, he thanked all those involved in the project for the excellent work done so far. According to Feldmann, the new Old Town will enrich the Main metropolis enormously after its opening in 2018 and further strengthen the international reputation of the trade fair city. "With this quarter, the city of Frankfurt is getting its heart back. Thanks to the successful mix of around 80 apartments, many shops, restaurants and caf&eacute;s, a lively urban quarter is being created in the heart of our city, which will be a special attraction both for Frankfurt's citizens and for the many guests from all over the world."

Head of Planning Mike Josef is also looking forward to the new Old Town. "With this project, we are promoting inner city development and ensuring a densification of uses in a central location. In addition to gastronomy and retail, a cultural hotspot is also being created here." For example, the Struwwelpeter Museum, the Stoltze Museum and a branch of the Historical Museum will move into the new old town. The finds from the archaeological garden could also be presented for the first time in appropriate quality as a museum through the superstructure with the town house.

Lord Mayor Feldmann and Head of the Planning Department Josef affirmed that Frankfurt is succeeding in an important piece of urban repair with the DomRömer project. The path relationships and the inner-city quality of stay would be greatly improved by the small-scale ensemble of 35 buildings and the Stadthaus as a centrally located event venue.

Michael Guntersdorf, managing director of DomRömer GmbH, which was commissioned with the construction, thanked the architects, planners, companies and craftsmen, but not least the politicians. "It was a courageous decision to tackle this project. The site is challenging, it is located in the middle of the city, there is underground parking and the subway underneath and there is virtually no storage space available. Nevertheless, the politicians decided at the time to implement the will of the citizens and to rebuild the old town, which had been destroyed in the Second World War. We were happy to take on the challenge and are proud to implement the project. The people of Frankfurt will get a place where they can experience their rich city history - in contact with the houses, which reflect the architecture of different eras, and in dealing with their own origins."

The level of interest in the reconstruction of Frankfurt's old town was evident after the presentation of the new project film at the EXPO REAL real estate fair in Munich. Interested parties have since been able to find the film and a 360-degree version, through which they can navigate themselves with their smartphones, on the project website at <link http: www.domroemer.de _blank>

. Their access numbers have literally exploded after the presentation of the film, Managing Director Michael Guntersdorf is pleased to say. "The new visualizations contain a lot of architectural details and give a very good impression of how the buildings will look to each other. It's great that this is attracting so much interest." He said the high level of interest in the project also sends a positive signal to tradespeople who are currently applying for retail space on the ground floors of the buildings. "We place a lot of emphasis on a sensible mix of uses. We want businesses to locate here that enrich the neighborhood and are also interesting for Frankfurt's citizens." Guntersdorf is optimistic that the right mix will be found. "People will stroll through the alleys, meet friends and run errands - and have a coffee at the end. The Altstadt will be a lively district in the heart of Frankfurt."
Share: