Touchdown in Mainhattan - NFL comes to Frankfurt
from FFM Aktuell 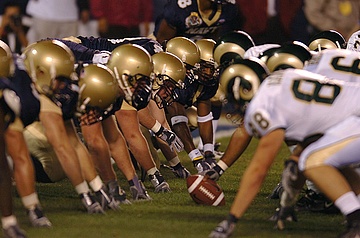 This is the perfect tune-up for Sunday's Super Bowl: the National Football League (NFL) officially declared on Wednesday that Frankfurt and Munich have been awarded contracts to host four regular-season NFL games in Germany for the next four years, starting with the 2022 season. The first game at Deutsche Bank Park will be played in 2023.

"We are thrilled to welcome Munich and Frankfurt to the NFL family and are happy to reward our fans in Germany for their passion by giving them the spectacle of an NFL regular season game," NFL Commissioner Roger Goodell said.

Frankfurt's head of sports Mike Josef is happy about the award, which will give the sports city of Frankfurt another flagship event in addition to the many other internationally significant events such as the Ironman or the cycling race on May 01: "American football was and is at home in Frankfurt. That's why I'm very happy about the NFL's decision to come to Frankfurt on a regular basis. Having NFL games at two venues is ideal. It shows that we as a city have made a lot of effort and, together with Eintracht Frankfurt and many supporters, have delivered a good overall concept. It is not too little to say that we have achieved something historic by bringing the biggest football league in the world to the football city of Frankfurt. This is where American football began in Germany in 1945 and this history is now being continued."

Axel Hellmann, spokesman for the board of Eintracht Frankfurt, added: "The NFL is coming to Germany and bringing football back to Frankfurt. We are totally thrilled and very proud that the NFL has decided to play two games in Frankfurt in the next four years. Here with us at Eintracht Frankfurt, in the heart of Europe. We are looking forward to it tremendously."

The selection process for NFL games in Germany began last year with initial expressions of interest from nine cities, after which Düsseldorf, Frankfurt and Munich were invited to participate in an intensive application process. In addition to the games, the partnerships between the NFL and Munich and Frankfurt include joint fan activities, community involvement programs and other NFL initiatives. For events surrounding the game, such as large fan festivals, investments will be made in the coming months to prepare venues so that Frankfurt can prove itself a worthy venue for the NFL. For fans of American football, Frankfurt is guaranteed to have a lot to offer in the coming years, even apart from the NFL game. We are excited.