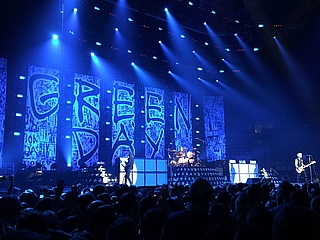 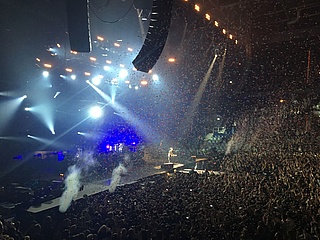 Seven years after their last concert in the Rhine-Main area, the indestructible punk rockers Billie Joe Armstrong, Mike Dirnt and Tr&eacute; Cool from Greenday rocked the SAP Arena in Mannheim on Wednesday (January 19). Fans of several generations from Frankfurt & Rhein-Main flocked to the green-lit concert arena. At 7 p.m. sharp, supporting act The Interrupters entered the stage: with melodic ska-punk songs, the four Californians put fans in a celebratory mood and provided a perfect entr&eacute;e. Green Day opened the concert with concentrated power. Know Your Enemy blared through the concert hall and the fans were going wild from second one. It quickly became clear that this concert was something very special for many. With a lot of charm and his unmistakable humor, frontman Billie Joe Armstrong entertained the audience. But he also took time to strike more serious notes. Among other things, he received a lot of applause for his political statements about the future president Donald Trump.

Whoever has attended a Green Day concert knows that the band doesn't just "play down" their songs. Fans are intensely involved in the show - making fan dreams come true. Several fans got the unique opportunity to support the band vocally and instrumentally. A young guitarist was even handed a guitar on stage by her idol. But even those who weren't lucky enough to get a taste of the stage didn't go "empty-handed" this evening. The visitors were grateful to experience a band without star airs - and of course finest punk rock with consistently brilliant melodies and clever lyrics. The show itself was powerful and rousing. The fact that the band performed on a very puristically designed stage and relied neither on big video screens nor opulent pyro effects therefore didn't bother anyone. On the contrary: the simplicity of the setting enhanced the presence of the musicians.

The setlist of the evening included just about all the big Green Day hits from over 20 years of the band's history. The mixture of classics like Holiday, She, Burnout, When I Come Around, or Basket Case and the songs from the current album "Revolution Radio" was convincing. Green Day can add another facet to their nimbus as one of the greatest bands of today with the current brilliant Revolution Radio Tour. With the current tour, the musicians proved once again how well-deserved their induction into the "Rock'n'Roll Hall of Fame" in 2015 was