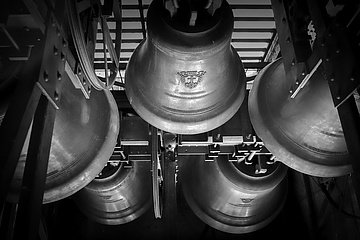 Every year on the afternoon of Christmas Eve, many thousands of Frankfurt residents gather on Römerberg to listen to the sounds of the Great City Ringing. It is a very special atmosphere that is created here - an atmosphere that you simply have to experience. This year, like so many things, this is unfortunately not possible. While at Easter and Whitsun the bells still rang live on site, but people were encouraged to watch an online recording of the bell concert from home, there was only an online-only version of the Great City Ringing for the 1st of Advent.

On Christmas Eve, the offer will be extended, making it accessible to even more people. The bells will again not ring locally, but in addition to the online stream, the city bells will also be broadcast on Radio Frankfurt on UKW 95.1, DAB+ from 16:30. Mayor and head of the church Uwe Becker and Stephan Schwenk, managing director of Radio Frankfurt, will be broadcasting the special and unique sound experience on the radio for the first time.

"I hope that we can give many Frankfurt citizens and all fans of the Great City Ringing a part of their Christmas tradition," says head of the church Becker. "As every year, I too always look forward to the date in particular. Unfortunately, we had to cancel the Great City Ringing on site this year in order not to attract too many people to the Old Town and Römerberg in times of Corona. All the nicer that we can now experience this unique sound experience in Germany together at Radio Frankfurt and thus ring in the Christmas holidays."

Stephan Schwenk, managing director of the Radio Frankfurt station, is proud to be a part of this tradition in this difficult year: "We at Radio Frankfurt are delighted to be able to bring the traditional Great City Ringing to the living rooms of the people of Frankfurt at this time of year. For all of Frankfurt, this is a ritual that unfortunately cannot take place open air due to the ten inner city churches," Schwenks said.

The tradition of Frankfurt's city bells dates back to the 14th century. The first ringing of all Frankfurt bells is known from 1347, for the funeral of Emperor Ludwig IV. Later, the bells were rung at all coronations. In May 1856, the Senate of the Free City of Frankfurt decided to ring the bells at Christmas, Easter and Whitsun. The current composition goes back to the Mainz bell expert Professor Paul Smets, who composed the peal in 1954. The "Bürgerglocke" of the Paulskirche forms the prelude, followed by the Katharinenkirche at the Hauptwache, the Liebfrauenkirche, the Peterskirche and the Heiliggeistkirche at the Dominikanerkloster. The bells of the Leonhardskirche, the bells of the church at the Carmelite monastery, as well as those of the Alte Nikolaikirche at the Römerberg and the five bells of the southernmost inner city church, the Dreikönigskirche at the Sachsenhäuser Mainufer, will then join in the interplay.

"The bells of the inner city churches are very different and each one is a work of art in itself. Together they form a touching sequence of sounds," Becker says. "Even though they are recordings, perhaps nevertheless the Great City Chimes can create a special sense of 'we' when we all experience it together on the radio. With this special offer, we also want to make those people happy who may not be able to use online access. I thank Radio Frankfurt for this cooperation," says the head of the church.

In addition, the Great City Ringing is also available online at http://www.frankfurt.de as well as on the Facebook page of the city to be heard on Christmas Eve from 16.30 each. Ten churches with a total of 50 bells are perfectly matched and then form the very special sound of Frankfurt online.