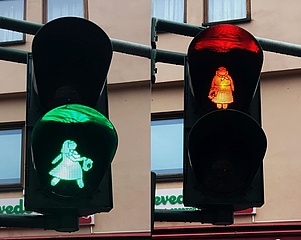 This unique attraction virtually greets visitors to Alt-Sachsenhausen as they cross Elisabethenstrasse, Paradiesgasse and Kleine Rittergasse and, of course, bids them farewell again on their way home. The idea for a special traffic light in Sachsenhausen as a gateway to Alt-Sachsenhausen first came up in the summer of 2018. After testing and graphic design, it has now actually become a reality after more than a year.