"Train of Diversity" travels through Frankfurt
from FFM Aktuell 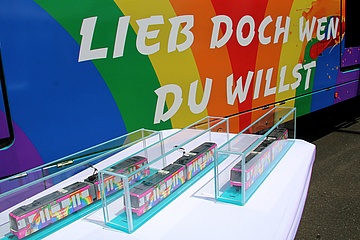 It shines in bright rainbow colors and bears the writing: "Love whoever you want". Yes, that's exactly how it should be. After all, love is something so beautiful and important - especially in times when hate seems to be on the rise, not only on the net but also on the streets. But even today it is not self-evident for too many people that everyone can love if he/she wants to. That's where the "Bahn der Vielfalt" comes in handy. It was designed on the occasion of the 50th anniversary of the uprising at the Stonewall Inn on Christopher Street, New York, by the Department of Integration and Education together with the CSD Frankfurt Association as well as the Frankfurt Transport Company (VGF) the train.

Integration Department Head Sylvia Weber said at the presentation of the train: "Our city is rich in social diversity and rich in people who are committed to living together well. The LGBTIQ community is very active, especially in Frankfurt, and strengthens cohesion in our city with numerous projects, including the CSD as the largest and most visible event. This great metro is a sign of respect and gratitude from the city of Frankfurt for this important commitment. I am glad and proud that my department is financing the foliation of the &sbquo;Bahn der Vielfalt'. On behalf of the CSD Frankfurt Association, I would like to thank the initiator of the project, Britta Helfrich. I thank the VGF for their willingness to enter into this successful cooperation."

VGF Managing Director Thomas Wissgott emphasized, "True to our corporate mission statement &sbquo;Everyone rides', VGF stands with full conviction for diversity, openness and tolerance. We live these values within the company and in our daily challenges. Therefore, we are very happy to support here and look forward to this cooperation."

The CSD Frankfurt was pleased that after the permanently installed traffic lights, another highlight will now be seen on Frankfurt's streets. "Through the &sbquo;Bahn der Vielfalt', which was planned together with the Department for Integration and Education and the VGF, the visibility of lesbians, gays, trans* -and intermenschen in public is increased and people are sensitized to diversity. This is not only fitting for Frankfurt, a city known for its diversity in all areas. Rather, the message is transported far beyond Frankfurt's borders by the millions of passengers from Frankfurt, the surrounding area and all over the world. This is an important sign on the 50th anniversary of the Christopher Street riots in New York, where queer people stood up for their rights for the first time and sent a signal to the whole world," said project initiator Britta Helfrich and CSD spokesman Joachim Letschert.