Trams south of Main interrupted for one week
from FFM Aktuell 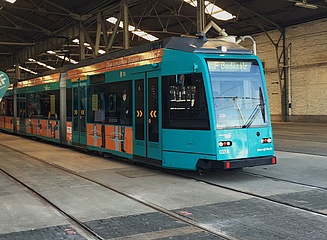 Substitute bus service has been set up

Whoever is travelling by tram in Frankfurt will have to be prepared for some inconvenience in the coming week. Because of track construction work on Paul-Ehrlich-Strasse, tram lines 12, 15, 19, 20 and 21 run from Monday, 26 August, around 2 a.m., to Sunday, 1 September, around 3 a.m., south of the Main River, either not at all or only on sections. A rail replacement service (SEV) with buses will be set up on two routes.

After the work currently taking place in Niederrad, the tram line 12 will initially be in regular service again from Friday, August 23. From Monday 26 August, however, there will be no trips between Stresemannallee/Gartenstraße and the University Hospital. Two SEV lines bridge the interrupted section of the route.

The line 15 does not run between Stresemannallee/Gartenstraße and Haardtwaldplatz during the period mentioned and will be replaced here by SEV line 1.

Coming from Fechenheim, the trams of line 12 go as usual to Stresemannallee/Gartenstraße, from where they go as line 15 to Südbahnhof or to the city limits of Offenbach.

Lines 19 and 20 dropped, 21 with unfamiliar destination

The tram lines 19 and 20 did not run. Line 21 does not go to the stadium, but from Stresemannallee/Gartenstraße via Stresemannallee to Louisa Bahnhof. The SEV line 2 runs to the station Oberforsthaus.

Not all SEV stops are located in the immediate vicinity of tram stops. There is a signpost on site.

S trains and buses as alternative

traffiQ and VGF recommend their passengers to also use the alternative travel options in the dense Frankfurt public transport network. The S-Bahn lines S7, S8 and S9 are available between the main station and Niederrad station and the main station. Bus lines 61 and 78 depart from the Südbahnhof station. They take you to Niederräder Landstraße and continue via Oberforsthaus to the airport (line 61) or via Bürostadt Niederrad to Schwanheim (line 78).

Walking Thursday, August 29, no trams to the stadium. Passengers wishing to attend the Europa League qualifying match in the Commerzbank Arena are requested to use the S-Bahn lines S7, S8 and S9. Particularly recommended are the suburban trains, which also depart from tracks 20 to 23 in the main hall. In addition, selected journeys on the RE70 regional train line also stop at the stadium.

The timetable information at http://www.rmv-frankfurt.de considers the changed timetable. The RMV service telephone number 069/24248024, which is available around the clock, will also inform you about the best way to travel.