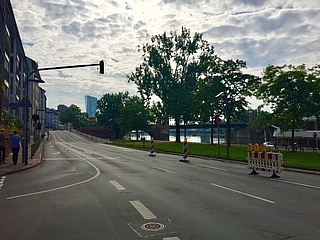 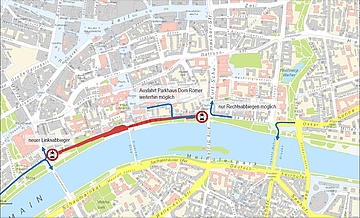 After long planning, action is finally following: The northern bank of the Main - Mainkai, Untermainkai - between the Untermainbrücke and the Alte Brücke has been car-free since Monday, July 29 (currently apart from the suppliers for the Mainfest). At least for one year. Until the Museumsuferfest 2020, this section will remain closed to motor traffic on a trial basis. During this period, the intention is to analyse how traffic in the city centre is changing and to collect data on traffic flows. Let's hope that the big chaos that many commuters fear, especially in the initial phase, does not occur.

Major reconstructions on the Main embankment are not planned during the trial phase. However, restaurants and Caf&eacute;s will have the opportunity to expand their outdoor dining. Furthermore, smaller events will be held - in addition to the usual city festivals - and more seating will be added to the street furniture. In the coming year, a balance will be drawn and a decision made as to whether the temporary opening of the Mainuferstraße for cyclists and pedestrians will remain permanent. The two banks of the Main are among the absolute favourite places, both for Frankfurt residents and visitors. With the opening of the Mainufer for pedestrian and bicycle traffic, a significant improvement in the quality of stay is expected.

One man's joy is often another man's sorrow. Traffic obstructions are not guaranteed to be absent. But how extreme these will turn out, remains to be seen. In order to counteract the big chaos, the traffic department asks motorists to drive around the closed area or to change to environmental means of transport such as public transport or the bicycle as well as to walk. For whom this is an alternative, which should take this in any case.

The traffic info at a glance:

The access to the Dom Römer parking garage is closed from the eastern side. It is still possible to exit the Dom Römer multi-storey car park via the northern bank of the Main in an easterly direction.

Due to the closure, the bus parking spaces on the northern bank of the Main will be relocated to Theodor-Stern-Kai 1 (Allianz building).

Further up-to-date traffic information can be found at http://www.mainziel.de