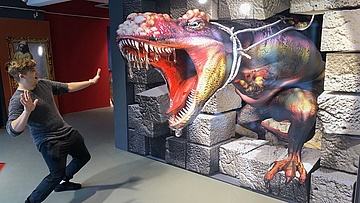 In times when many things are closed, a new opening is a real exception. But yesterday, Thursday 07 May, a new leisure attraction actually opened to Frankfurt - albeit temporarily. The 2nd floor of the MyZeil Shopping Center is home to the first Trick Art 3D museum in the Rhine-Main area for a short time. Fantastic illusions for young and old await visitors here. But what exactly is a 3D Trick Art Museum?

On a 400 square meter pop-up space you will find 22 mystical images by artist Masashi Hattori, which only reveal their secret from a certain perspective and interact with visitors. You don't just have to look at them, you also have to interact creatively. In concrete terms, this means that the visitors position themselves, sometimes supplemented by props, standing, sitting or lying down, depending on their mood and creativity, either alone or with several people in or on the pictures, while one of them takes photos and videos from a special point. The special optics create a fantastic 3D effect. This not only looks really good, but is also enormous fun - of which our editors have convinced themselves at the opening.

The great thing is that visitors can give their creativity absolutely free rein and take home original, individual photo memories of a very special kind. Funny, crazy, sometimes even a little challenging and extremely cool - and gladly garnished with disguises that you may bring along. This is perfect fodder for your Instagram and Tik Tok accounts.

It's not uncommon to not believe your own eyes: thanks to the incredible 3D illusions of Japanese artist Masashi Hattori, the little ones become giants while their parents shrink into miniature. You become a window cleaner on a Frankfurt skyscraper, balance in front of the Frankfurt skyline, float through the clouds on a flying carpet, race down the river on a wooden pole or fight with a ninja - you can now experience such creative and "lively" photo motifs directly on Frankfurt's Zeil.

Made in Japan: A new art genre conquers the world

Japanese artist Masashi Hattori received his Master of Arts degree from Tama Art University in Tokyo and is one of the most successful and well-known 3D trick art artists in Asia. The now more than 150 themed worlds, which Hattori always pre-sketches by hand and then perfects on his PC, have already been presented very successfully in more than 50 successful solo exhibitions, as well as in four permanent exhibitions in Japan - always with great media interest.

While the 3D trick art wave has now also reached Australia and New Zealand, German entrepreneurs Daniel Kayser and Matthias Goetz (also known as "Die Schwarzlichthelden" in 3D Minigolf) are the first to bring the art genre, which is still largely unknown in Europe and the USA, to the Rhine-Main area directly to Frankfurt in the MyZeil: https://www.myzeil.de/

"Eigentlich wollten wir schon am 01.04.20 open, only the Corona virus came us in between" regrets Daniel Kayser and hopes that as many visitors as possible in the remaining time come to the MyZeil to experience the 3D Trick Art in Frankfurt. "We wanted to bring again a completely new leisure experience in the Main metropolis and are also here 100% convinced to enrich Frankfurt, in addition to the black light mini golf, another special attraction," says Daniel Kayser, Managing Director of Trick Art Heroes.

Naturally, the necessary hygiene and distance regulations also apply here. In the 3D Trick Art Museum itself, wearing mouth-nose protection - which is required throughout myZeil - is recommended and distance from other visitors must be maintained. In the photo images themselves, there is enough distance between the person taking the photo and the person being photographed, so masks can be discarded here.

So photo enthusiasts and self-promoters between the ages of six and 99 may now show off their skills in Frankfurt's myZeil. But remember: The Trick Art Hero - 3D exhibition is running as a pop up museum and will only be a guest at the MyZeil premises for a short time. So stop by promptly!!

Admission for adults is 15 euros, while pupils, pensioners and students pay 12 euros. Children from 5 to 15 years pay only 9 euros.

In addition to single tickets, there are also reduced rates for families.