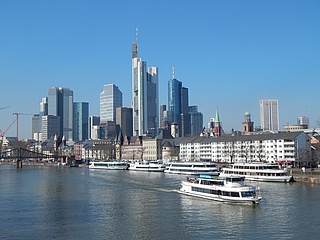 (pia) On Saturday, September 17, a large demonstration will take place in Frankfurt. As a result, the four tram and six bus lines operating in the city center will have to be diverted or interrupted in the afternoon.

S-Bahn and U-Bahn trains, on the other hand, will run unimpeded and can serve as an alternative for many passengers. The U4 and U6 lines will also be running with additional carriages, providing more space.

The changes in detail

Affected by the demonstration are the tram lines 11, 12, 14 and 18, the bus lines 30, 36, 45, 46 and 64, as well as the rail replacement service for the line U5, which will run from about 12 to 18 o'clock so: Tram line 11 only runs between Höchst and Hauptbahnhof. In the east of Frankfurt, it comes from Fechenheim and runs from Ostbahnhof as line 14 to the zoo and Ernst-May-Platz.

Line 12, coming from Schwanheim, also ends at Hauptbahnhof. In the east of the city, it runs from Hugo-Junkers-Straße via Bornheim Mitte to Friedberger Landstraße and then continues as line 18 to Gravensteiner-Platz.

South of Main, Line 14 limits its trips to the Louisa - Südbahnhof section.

Bus Line 30 runs between Bad Vilbel and Friedberger Warte, from where it is diverted to Bornheim Mitte. Line 36 runs on two sections, between Westbahnhof and Eschenheimer Tor and between Hainer Weg and Südbahnhof.

Line 45 does not come to Deutschherrnviertel, but runs shortened between Südbahnhof and Großer Hasenpfad.Line 46 has to skip the southern bank of the Main, running only between Römerhof and Hauptbahnhof. Line 64 avoids Reuterweg, Alte Oper and Hauptbahnhof; it only runs between Ginnheim and the Miquel-/Adickesallee underground station.

The rail replacement bus service for the U5 underground line runs between Eckenheimer Landstraße/Marbachweg and the German National Library, from there it is diverted to the Miquel-/Adickesallee underground station. There will be no trips of the Ebbelwei-Express of the VGF.

Where trams and buses cannot run at all

Please inform before starting your journey!

For all interruptions, there are good or at least acceptable alternative travel options with S-Bahn and U-Bahn. traffiQ recommends that you inform yourself about the current situation and possible connections before starting your journey. The staff of the RMV service telephone on 069/24248024 can also help. They are available around the clock. The timetable information on the Internet at <link http: www.traffiq.de _blank>