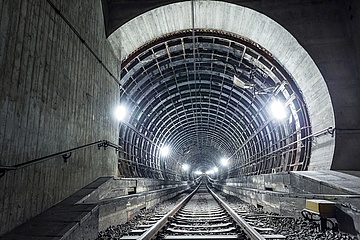 Even on the home stretch in setting up the new electronic interlocking system (ESTW), more testing and acceptance runs are still needed. That means there will be more tunnel closures. The next one is already taking place over Corpus Christi from 1am on 31 May until 4am on 4 June. Anyone who needs to commute into the city centre or is travelling to the BigCityBeats WORLD CLUB DOME at the Commerzbank Arena at the weekend should find out about the possible connections beforehand.

The S-Bahn lines S1 to S6 as well as the S8 and S9 will not be running through Frankfurt city centre during this time. To ensure that all passengers can still reach their destination quickly and comfortably, the timetable offer in Frankfurt will be extended on many lines according to a familiar scheme.

As was the case during the closures during the Easter holidays and the Ascension weekend, around 2700 rental bikes from Call a Bike will be waiting at more than 300 stations for anyone who wants to get around the closure in a sporty way. During the S-Bahn tunnel closure, the first 30 minutes of each ride are free of charge. For new customers, simply sign up for the basic rate via the Call a Bike app or at <link http: www.callabike.de _blank>Www.callabike.de and save the annual fee during the closure.

In addition, RMV and DB are reinforcing the service staff on site: 17 passenger guidance teams will be on standby at busy stops during the closure to help passengers directly on the spot.

The changes in detail:

During the closure, the S2 runs every half hour on the sections Niedernhausen - Frankfurt Hauptbahnhof (low) (from 5 am to 10 pm) or Frankfurt Hauptbahnhof (high) (from 10 pm to 5 am) as well as between Dietzenbach and Frankfurt-Mühlberg (from 5 am to 10 pm). From 10 p.m. to 5 a.m., the S2 from Dietzenbach already ends in Offenbach-Kaiserlei. In Mühlberg and Kaiserlei, there is a connection to a replacement bus that is on its way to Frankfurt Südbahnhof at the respective times. From Mühlberg, there are also tram lines to Frankfurt city centre.

The S6 runs every half hour between Frankfurt Hauptbahnhof (up) and Friedberg. The stops Messe and Galluswarte are cancelled.

The S7 is not affected by the closure.

The S9 runs every half hour between Wiesbaden and Frankfurt Hauptbahnhof (up) and from 5 am to 10 pm between Hanau and Frankfurt-Mühlberg. From 10 p.m. to 5 a.m., the S9 commutes in the eastern section between Hanau and Offenbach-Kaiserlei. In Mühlberg and Kaiserlei, there is a connection to a replacement bus to Frankfurt Südbahnhof at the respective times. From Mühlberg, there is also a connection to tram line 16 to Frankfurt city centre. A shuttle bus will also be operated between Offenbach Ost and Frankfurt Airport, Terminal 1, with no intermediate stops.

lines U1, U2, U3 and U8: To the Hauptwache in dense frequency

The subway line U2 (Südbahnhof - Bad Homburg-Gonzenheim) runs on Friday and Saturday continuously with three-car trains. On Corpus Christi and Sunday, three-car trains are in operation from about 12:00. Together with the U1, U3 and U8 lines, the U2 connects Frankfurt Südbahnhof with the central transfer stations Willy-Brandt-Platz and Hauptwache at frequent intervals.

The U2 from Bad Homburg-Gonzenheim is an alternative to the S-Bahn for Bad Homburg residents. The U3 connects Oberursel (connection from the S-Bahn line S5) with Frankfurt city.

At Eschersheim station, it is possible to change from the S-Bahn line S6 with a short walk to the four subway lines at the station "Weißer Stein".

Lines U4 and U5: As often as possible

The U4 and U5 take over a large proportion of passengers from the parallel S-Bahn between Hauptbahnhof and Konstablerwache. They also provide connections to the U6 and U7 lines at Bockenheimer Warte and the U1, U2, U3 and U8 lines at Willy-Brandt-Platz.

The U4 line always operates there with four-car trains that can accommodate up to 700 passengers. On Friday, it runs continuously from 6 am to 9 pm at dense 5-minute intervals. It is supplemented on this section by the U5 line with two-car trains, so that a subway provides good connections there every two and a half minutes during rush hours.

To ensure that the U4 with its four-car trains can run frequently and without disruption on the particularly important tunnel section Bockenheimer Warte - Hauptbahnhof - Seckbacher Landstraße, it will not run as far as Enkheim during the S-Bahn tunnel closure from 6:00 am to 10:00 pm. Passengers are asked to use the U7 line, which also has Enkheim as its destination.

Lines U6 and U7: Almost normal

The tram line 16 can still only run between Oberrad Balduinstraße, the Mühlberg S-Bahn station and Ginnheim due to the construction work in Oberrad; for the most part, it offers a ten-minute frequency. On Saturdays, Sundays, and holidays, Line 16 normally begins its service with a half-hourly frequency. However, during the S-Bahn tunnel closure, it will be condensed to a 15-minute frequency between Oberrad and Westbahnhof as soon as service begins.

Since the trams along the Mühlberg S-Bahn station cannot run more frequently due to the construction work in Oberrad, Deutsche Bahn is using buses as a supplementary rail replacement service between Mühlberg and Südbahnhof.

Bus line 61 connects Frankfurt Airport with Südbahnhof, where there is a connection to the city's underground and tram network. It will run with articulated buses during the tunnel closure, offering more seats.

On line 64, additional buses will run every quarter hour between Hauptbahnhof, the (closed) Taunusanlage S-Bahn station and Bremer Platz during rush hour in the morning from about 7 to 10 am and in the afternoon from about 3 to 7 pm.