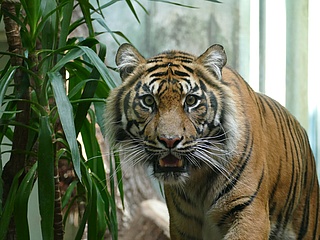 The tiger enclosure at Frankfurt Zoo has not been empty for as long as thought after all. Two Sumatran tigers have moved in - not permanently, but definitely for the coming months. The two sisters Zuma and Tipah come from the NaturZoo Rheine, where urgent work has to be carried out on their enclosure. During this time, the two female tigers are welcome guests in Frankfurt.

On Thursday, 2. September, they came in the afternoon from Rheine in the Main metropolis and immediately after their arrival it went into the tiger plant. There it is now time for the two to get used to each other. Frankfurt Zoo was able to give them this temporary home because male tiger Vanni had to be put down at the beginning of July due to an incurable tumour in the gastrointestinal tract, and the enclosure was therefore unoccupied for the time being. When the team from NaturZoo learned of the tiger's death, they inquired whether Frankfurt Zoo would be willing to take over the tigresses for about three months.

"I am pleased," says Ina Hartwig, Head of Department for Culture and Science, "that we are in a position to help other zoos. And this is already happening again, as we are currently already housing a group of Humboldt penguins from the Luisenpark in Mannheim. These two examples show how important a well-planned and built zoo with sufficient spatial capacity is for animal management. With the further development of the zoo, we want to make this a reality for all areas. But first I am pleased that over the next time tigers can be seen again in our zoo."

After all, the Sumatran tigers, which are highly endangered in the wild, are important and for visitors particularly impressive ambassadors for nature conservation. This year, despite the low number of visitors due to Corona, Frankfurt Zoo was able to transfer 50,000 euros from the donations of the "Nature Conservation Euro" established in March of this year to selected nature conservation projects. Of this, 10,000 euros alone went to the Bukit Tigapuluh Conservation Programme of the Frankfurt Zoological Society, which is committed to preserving the unique habitats on Sumatra and thus ensuring the survival of not only the Sumatran tigers.

Zoo veterinarian Dr. Christina Geiger is pleased about the unexpected development: "With all regret about the loss of our tiger it is nevertheless a good thing that we can help the colleagues from Rheine and at the same time show tigers with us again. It is also good that no quarantine was necessary in this case, as the animals have already undergone all examinations in Rheine. This means one less change of location for them. This example shows very well how dynamically the situation in zoos can develop. With us, a high degree of flexibility is always required due to the handling of live animals."

The two tigresses Tipah and Zuma are no longer dependent on their mother. Born in 2019, they are old enough to be released to other zoos under the breeding program. If the studbook coordinator finds a suitable place for the two in the coming weeks, they would be taken there directly from Frankfurt.

Should it not work out so quickly with a suitable place and, if necessary, even with a suitable partner, the animal gerbils will travel back to Rheine, where after the renovation work on the facility, they will again have sufficient space available.