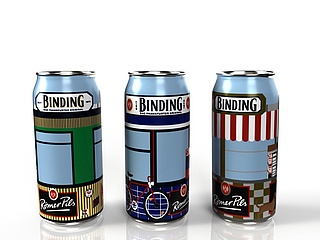 Water houses are an integral part of Frankfurt's cityscape. They are a true original - just like the Binding Brewery, which has been located in Frankfurt for more than 145 years. Now there is a very special combination of these two originals in the form of limited-edition Binding Römer Pils cans with a water hut look. They are the result of the Binding design competition initiated by the brewery together with the Offenbach University of Design. The winner of the competition was graphic design student Anne Krieger, whose water cottage motifs were convincing. From 6 May, a real piece of Frankfurt will adorn the can of a Frankfurt original.

Under the direction of Professor Klaus Hesse, students at the Hochschule für Gestaltung (HfG) had developed creative design ideas for the Binding Römer Pils can. Among them was Anne Krieger with her water house motifs, which she, as a native of Frankfurt, sent into the race out of personal attachment and regional reference. But also because the characteristic round shape of the water cottages ideally matches the can, which is also round.

"When we launched our competition, we didn't realize that we would see so many impressive works," says Claudia Geisler, Marketing / PR at Binding Brewery. "Our jury with Binding colleagues from marketing and creation and with Professor Klaus Hesse from the HfG were spoilt for choice to pre-select the best four designs from around 30 submissions. On Facebook, over 40,000 Binding fans were then involved in the final vote for the winning design."

Professor Klaus Hesse agrees: "So many great creations were presented that we sent four designs into the Facebook voting instead of the originally planned three, which Anne Krieger won."

In stores from May 6, while stocks last

Her three motifs will alternately adorn the limited-edition half-liter cans of Binding Römer Pils from May 6, based on real water houses with their typical characteristics, from hip to alternative to conservative. Frankfurt diversity. They are sure to become popular collector's items very quickly.

Since the students have put so much heart and soul into their work, the Binding brewery will implement two designs at once: In addition to the water house motifs, from mid-September there will also be the Frankfurt city views by the runner-up Anna Evers in the form of a gift tin as a crate addition. So anyone who buys a box of the Frankfurt original in stores then will get a Binding gift tin for free while stocks last.

You can also find more info at: www.binding.de