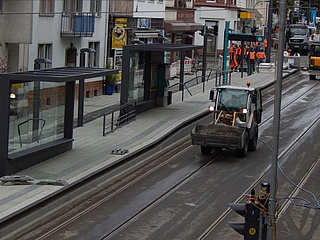 (kus) It's not quite a hundred strong, but the men in orange work clothes seem to be omnipresent around Musterschule and Glauburgstraße nonetheless. More than 70 workers from different companies are busy on the construction sites in the Nordend. Above Hermannstraße, a section of Eckenheimer Landstraße is being tarred, followed by the marking of the road, vis &agrave; vis the pavement is being plated. The fitting out of the platforms at the Musterschule with bus shelters, display cases, ticket machines and Dynamic Passenger Information displays has been completed, railings and light poles - ten per platform rear - have been set and the lighting tested. This is followed by clearing and cleaning work, material and other parts of the construction site equipment must disappear from the road by Saturday, 8 October. At the intersection of Eckenheimer Landstraße/Glauburgstraße, the traffic lights were put into operation on Wednesday, October 5, and the temporary structure was dismantled.

As in the past six weeks, construction sites along Eckenheimer Landstraße are working hard to meet the second opening date at the Musterschule. Acceptance by the technical supervisory authority is scheduled for Saturday, October 8, with the start of operations on Sunday, October 9, the modern "U5" type subway trains are then to run on the U5 line for the first time. As announced, they will call at the "Musterschule" station, which will then be ready for operation. At the same time, Eckenheimer Landstraße between Anlagenring and Glauburgstraße will be opened to through traffic. North of Glauburgstraße, "Eckenheimer" will remain closed to through traffic for the time being, but houses and shops will be accessible for residents and customers. Work on the "Glauburgstraße" station will continue until the end of October, with the U5 on the move and controlled by safety guards.

When operations begin, the VGF will be using modern "U5" vehicles. The replacement bus service will run for the last time on Saturday, and the stations "Neuer Jüdischer Friedhof" and "Eckenheimer Landstraße/Marbachweg" will also be cancelled and rebuilt.

According to the timetable, the first U5 train will leave the main station at 4:11 a.m. Sunday morning in the direction of Preungesheim. Until construction begins on the switch at Marbachweg on 17 October, VGF will operate 13 trains with two carriages each during rush hour, six of which will be parked at the old Eckenheim depot in future and pushed in from there. On Sunday, 9 October, shunting trips at the depot and transfer trips of the "PtB" cars last used between Marbachweg and Preungesheim via Eckenheimer Landstraße are therefore possible.

Accessible exit only at the middle platform section

When "Musterschule", the first of the two stations in the Nordend that have been modernized since March, goes into operation on Sunday, 9 October, passengers will encounter a special feature: Those who depend on a step-free exit at one of the two stations "Musterschule" and "Glauburgstraße" will have to make sure to board the train at the right place on the platform as soon as they start their journey at "their" station.

The reason: The approximately 73.5-meter-long platforms at the stations mentioned above are divided into three sections: the front and rear sections are approximately 60 centimeters high, while the middle section is 80 centimeters high. Barrier-free boarding and alighting is only possible at this middle platform section. At the positions where the other cars stop, there remains a step of about twenty centimeters marked with yellow dots on the platform edge.

The VGF has written to Frankfurt associations for the disabled and elderly, as well as doctors' surgeries and hospitals in the U5 catchment area, so that as many passengers as possible who are dependent on barrier-free boarding have been informed. A flyer can be found at
<link https: www.vgf-ffm.de de service service-fuer-fahrgaeste mobilitaet-fuer-alle _blank>

On Friday, 7. October, the VGF will distribute these flyers to passengers in the replacement buses and on Monday in the subway trains, as many people will be affected by the initially unfamiliar situation at the new station.

A special feature will also be found at the terminus "Preungesheim": The subway cars stop in such a way that the "right" doors are in the yellow marked boarding area when departing. This means for passengers of arriving trains that they have to walk a few meters to leave the station, since the trains do not go to the end of the platform